World's Most Premature Baby Celebrates First Birthday. He Was Given 0% Survival Chance

At the time of birth, the baby named Richard was so tiny he could fit into the palm of one hand 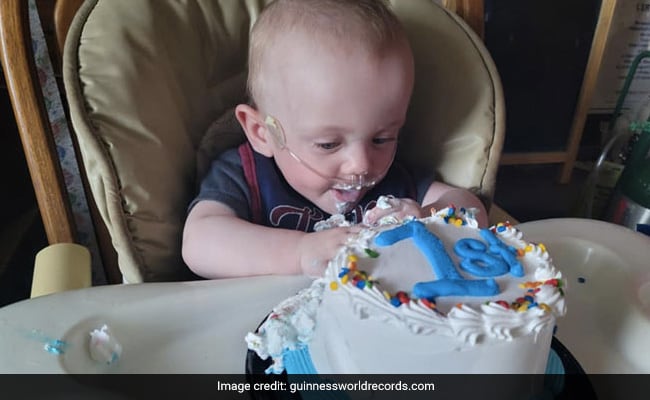 A baby, who holds the Guinness World Record for being the most prematurely delivered baby to survive, celebrated his first birthday recently. Richard was given 0% odds of survival by doctors when he was born several months ahead of schedule. Beth Hutchinson, from Minneapolis in the US, was due to deliver the baby on October 13, 2020, but she experienced medical complications and unexpectedly went into labour months earlier than anticipated. Doctors and her husband Rick Hutchinson held intensive discussions and agreed to deliver the baby and then do all they could to ensure he survives.

Richard Scott William Hutchinson was born on June 5 last year at a gestational age of 21 weeks 2 days, making him 131 days premature, the Guinness World Records said in a statement. The standard gestational period for a baby is 40 weeks. At the time of his birth, Richard weighed only 340 grams, or one-tenth of the average weight for a full-term newborn. He was so small that he could fit into the palm of one hand.

The initial prognosis for him was far from optimistic and doctors felt they were duty-bound to prepare his parents for the worst. During the prenatal counselling, Beth and Rick Hutchinson were “given a 0% chance of survival”, said Dr Stacy Kern, Richard's neonatologist at Children's Minnesota hospital in Minneapolis.

Dr Kern added that the doctors knew the first few weeks of Richard's life would be very difficult, “but I felt that if he could make it through that, he would be a survivor."

When Richard celebrated his first birthday this year, Guinness World Records officially recognized him as the most premature baby to survive. "It doesn't feel real," Beth was quoted in the statement as saying, adding that they are still surprised but happy about creating the world record.

Previously, the statement said, the record for the most premature birth was held by James Elgin Gill from Canada. James was born to Brenda and James Gill in Ottawa at a gestational age of 21 weeks 5 days, or 128 days premature, on May 20, 1987.