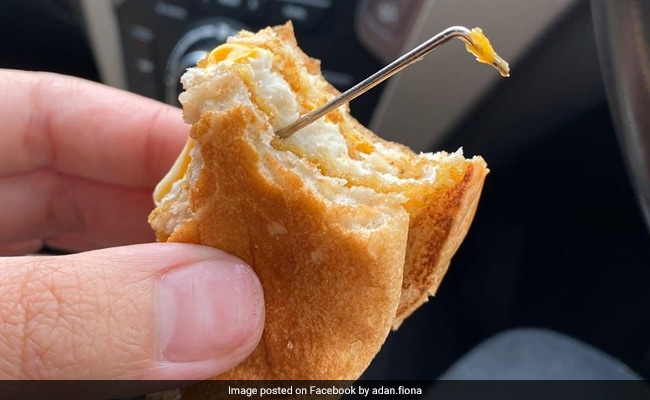 Ada Teaupa says she found a small metal rod in her McDonald's burger.

A woman from Australia says she found a small metal rod in a burger she bought from McDonald's. Ada Teaupa shared an angry note on Facebook on Wednesday, with pictures showing the half-eaten burger and the piece of metal she found inside it. The Sydney resident had purchased the 'Chicken n Cheese' burger at McDonald's outlet in Cartwright, according to The Sun.

"Look what I found in the chicken & cheese!! Nearly broke my tooth!" wrote Ms Teaupa on Facebook, sharing pics of the burger with the metal rod sticking out from inside the patty.

To make matters worse, she added that she had almost given the burger to her three-year-old niece.

Ms Teaupa says she felt a sharp pain in her tooth as soon as she bit down on the burger.

"I felt my tooth bite into something hard and thought 'oh no this is glass'," she said to 7 News Australia.

She then took the burger back to the McDonald's outlet, where the manager refunded her and offered her a replacement burger.

A McDonald's spokesperson told to 7 News that the global fast food chain would investigate the incident.

"We are disappointed that this has happened," he said.

"We take food safety very seriously and have strict processes and systems in place.

"An investigation is currently underway with the restaurant, and we encourage the customer to contact us to help us to investigate fully."