Watch What Happened When This Dog "Lost His Mind, Turned A Into Helicopter"

"Maldwyn has lost his mind and turned into a helicopter," wrote the dog's owner. 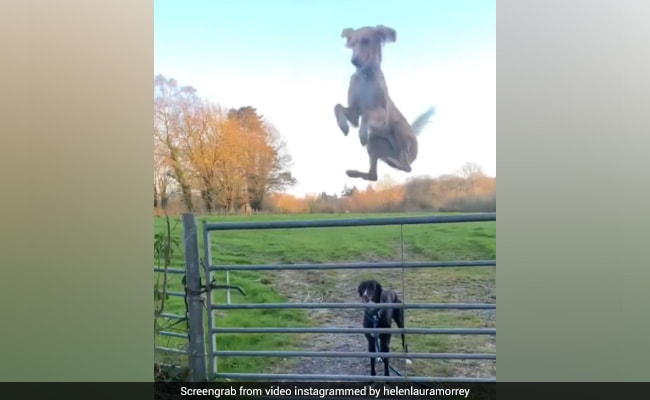 A viral video shows a dog jumping over a gate.

Need something bright and cheerful to lift your mid-week blues? Look no further than this happy video of a dog that "lost his mind and turned into a helicopter." The video, that is going viral online, shows the excited dog jumping over a nearly 4-foot-tall gate in a feat that has impressed millions.

Helen Laura Morrey, a resident of Wales, shared the clip of her Lurcher dog, named Maldwyn, jumping over the gate on Instagram, from where it spread to other social media platforms. Filmed in the village of Merthyr Mawr, the video has captured the astonishing moment that Maldwyn launched himself over the gate, his tail spinning behind him.

According to Daily Mail, Helen was walking with her dogs Maldwyn, Taro and Sky when the Lurcher decided to show off his athleticism.

"Even during times like these I'm blessed to have lovely places on my doorstep to take these 3 out," she wrote while sharing the video on Instagram. "Maldwyn has lost his mind and turned into a helicopter," she added.

Since it made its way to Twitter, Maldwyn's long jump has collected a whopping 6.8 million views. Take a look at it below:

The footage has received over 65,000 'retweets' and more than 2.7 lakh 'likes' on the microblogging platform, along with thousands of amused comments.

we had this scheduled as a we don't rate helicopters post but you beat us to it smh ????

That's what that tail's saying.