Watch: The Internet Found A Donald Trump Lookalike In Pakistan

The video was filmed in Sahiwal, Pakistan. 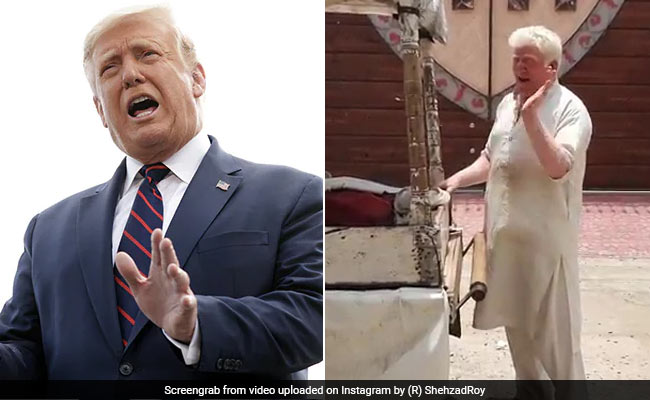 Donald Trump (L) and his lookalike from Pakistan (R).

The video was shared on Instagram and Twitter Thursday by Pakistani singer Shehzad Roy, who praised the kulfi seller's impressive voice and asked if anyone could put him in touch with the man. In the 23-second clip, the elderly man, who reportedly had albinism, can be seen wearing a kurta-pajama while standing in front of his ice cream cart.

The clip has received thousands of views across social media platforms. Many praised the man's voice, while others commented on his looks and mannerisms, which they found quite similar to Mr Trump's.

Several users identified him as a resident of Sahiwal in Punjab, Pakistan.

He is from Sahiwal, and luckily he is outside of my Friends House

This man is from Sahiwal.

Reactions were much the same on Instagram, where the video racked up over 200 comments.

"He is from Sahiwal. We grew up with his voice and kulfi in our streets," commented one Instagram user.

This is not the first time that the Internet has found a Donald Trump doppelganger. A few years ago, a potato farmer in Spain had also gone viral for her resemblance to the former POTUS.