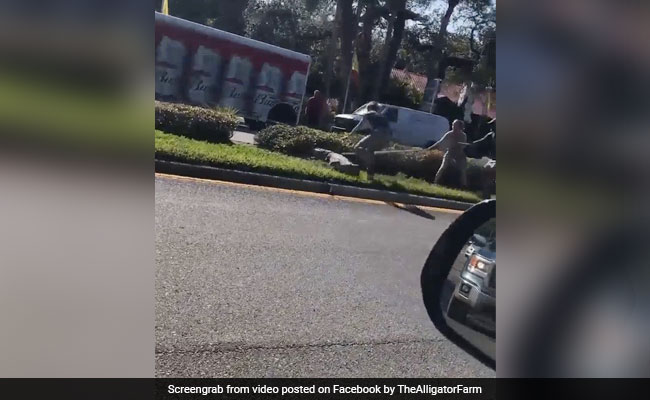 A dramatic video of employees of St. Augustine Alligator Farm Zoological Park, Florida, US, trying to capture a crocodile that had escaped from a van which was relocating the reptiles has surfaced online. In the 12-second video, we can see zoo staff struggling to recapture the reptile as vehicles pass by. The crocodile broke the window of the van and tried to escape, but the staff acted quickly and captured it before it could pose a threat to the public. The video has been shared by the zoological park on its Facebook page.

In the Facebook post, the zoo wrote, “Earlier today, we were relocating crocodilians to another area of the Zoo. They were secured and placed into our Zoo Van. This animal broke the back window of the van and made a dash down the road. Our crew acted quickly to recapture it, and deliver it safely to its new habitat.”

The post added that at “no time was there any real danger as the animal's mouth was secured”.

The video, which has been viewed more than 2.45 lakh times, was captured from the other side of the road by a person named Jessica Stark.

Many users praised the rescuers for their deft handling of the reptile.

“Not gonna lie, I really wish I would have witnessed this. My daughter would have LOVED to see. Great job ladies,” commented Kaitlynn Martin.

“This is awesome. Shoutout to those amazing women,” said Marcine Joseph.

“Imagine the surprise of the people in the cars behind” wondered a third.

A person named, Mario A. Mario, suggested the zoo to not use vans with windows to transport these animals. “Pro tip: use vans without windows,” the user said.

“Those are the type of moves we learned from Steve Irwin,” said Sara Smith, remembering the Australian conservationist and wildlife expert who earned fame as the host of The Crocodile Hunter TV series.

First Coast News carried an interview with the two women employees of the work at the St. Augustine Alligator Farm. Ms Anderson said that the place to where the crocodiles and alligators were being moved was “a very short distance”, about “0.1 miles” from their starting point.

Ms McCreedy, who was “in the back watching the animals”, recalled seeing the reptile “moving backwards”, but before she could do anything “he had already popped that window”.