Viral Video: This Himachal Road Is Not For The Faint-Hearted To Traverse

The video was shot from inside a car - a fact astonishing in itself, given the width of the road 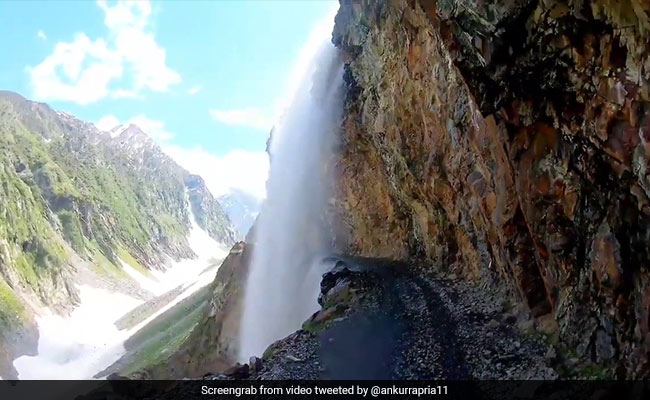 A video of a narrow, high altitude road in Himachal Pradesh has left viewers stunned.

This narrow road in Himachal Pradesh is not for the faint-hearted to traverse - though a video of it has amazed thousands of viewers watching from the safety of their homes. The video of the narrow, rocky road was shared on Twitter by Indian Revenue Service officer Ankur Rapria, who found it to be a fitting embodiment of the saying "Difficult roads often leads to beautiful destinations."

The video shows a mountainous road near the Sach Pass in Himachal Pradesh's Chamba district. Filmed from inside a car - a fact astonishing in itself, given the width of the road - it provides sweeping views of a snow-covered valley below. Mr Rapria said he filmed the video in July last year while travelling through the area. At one point during the video, he even crosses a waterfall falling right onto the road.

"Incredible India," he wrote while sharing the video on Twitter on Thursday. "Not a regular road, covered with snow for 8-9 months," he added.

The 54-second clip has been viewed over 27,000 times on the microblogging platform. It has also collected nearly 2,000 'likes' and several comments from viewers marvelling at the sight. While some described the road as "terrifying", others said it wasn't a path for the faint-hearted to travel.

A road not for the faint hearted

This is terrifying. But Himachal Pradesh is one of the most beautiful and mesmerising place in India.#HimachalPradesh

According to the Indian Roadie blog, Mr Rapria had driven his Mahindra Thar SUV to Sach Pass in July 2019. Describing his experience of the journey, he had said, "A trip to Sach Pass means that you will be driving on a narrow, badly broken dirt road, with a steep ascent... Add to it the fact that there are several waterfalls on the way; falling right on the road."