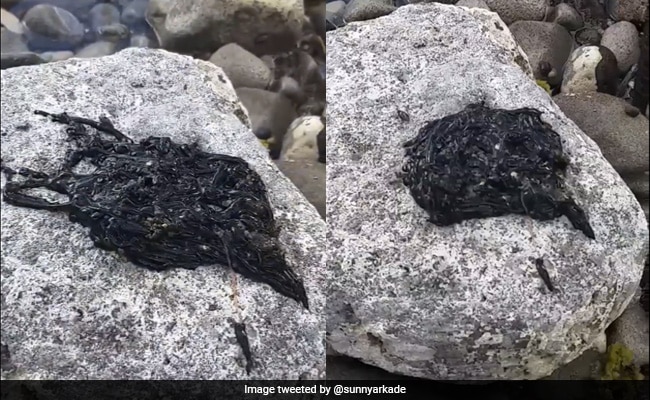 A rare creature or Venom symbiote? The Internet is divided over this video.

A massively viral video of a mysterious black creature has left millions fascinated - and still others convinced that the Marvel villain Venom has landed on the planet. Since the video surfaced online a week ago, several Twitter users have marvelled at the creature's resemblance to the alien symbiote featured in Spider-Man 3 and Venom movies. The 14-second video shows the strange black mass writhing on a rock as someone uses a blade to poke at it.

"Anybody know what this is?" asked Twitter user @sunnyarkade while posting the video of the worm-like creature. You can watch the footage below:

Anybody know what this is? pic.twitter.com/B2dQLTm4td

Since being shared on the microblogging platform, the video has collected a whopping 19.5 million views and thousands of curious comments. Many simply shared GIFs of Venom as response to the question of what the creature could be.

“April couldn't get any worse."

April: "We are Venom." pic.twitter.com/gvXYi43Tjh

"Clearly this is Venom. We've all been going through a lot already, we don't need alien symbiotes too," wrote one Twitter user.

"I'm pretty sure our new overlords from Glaxon 19 are NOT going to appreciate you poking their cute little puppy like that," another joked.

Several users were also curious about what the creature actually was. "No jokes at all. What is this seriously?" asked one person, while another wrote "Am I the only one who wants to know what this is?"

According to CBR, the official consensus on Twitter is that the creature is actually a bootlace worm - one of the longest animals in the world that can grow up to 180 feet in length. The worm secretes a toxic mucus that can paralyze its predators when it is provoked.