Viral Video: Man Rushes To Save Dog After Leash Gets Stuck In Elevator 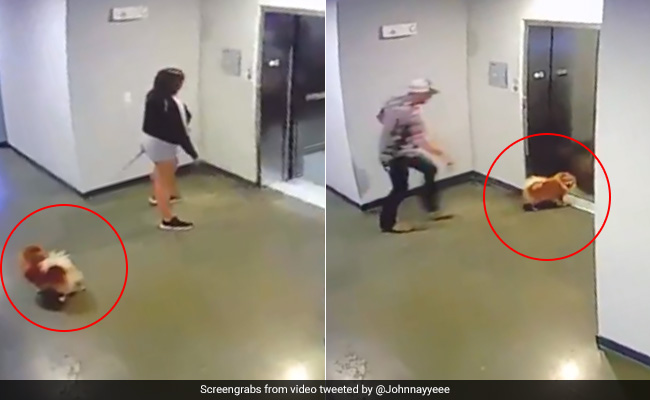 Johnny Mathis rushed to save a small dog whose leash got stuck in an elevator door.

One Texas man has won thousands of hearts by jumping into action to save a dog whose leash got caught in an elevator door. Johnny Mathis took to Twitter to share the video that shows him rescuing the small dog, thereby preventing a possibly fatal accident. The video has won him plaudits and gone massively viral with over 18.9 million views on the microblogging website.

Mr Mathis, 27, was coming home from work on Monday night when the incident occurred, reports NBC News. He was exiting the elevator when a woman, with her Pomeranian in tow, entered it. Footage from the building's surveillance cameras shows the elevator doors closing on the dog's leash, with its owner inside.

"I just happened to turn around as the door closed and it started to lift off the ground," wrote Mr Mathis on Twitter, sharing the harrowing video that shows him struggling to free the dog from its leash.

"I tried to break it at first," Mr Mathis said to NBC News. "I tried to lean down on it with all my weight but it wouldn't snap."

He was able to unbuckle the collar after 20 seconds, thus rescuing the dog. Watch the video below:

Along with almost 19 million views, the video has also collected a lot of praise.

you should be so proud of yourself for realizing what was about to happen and taking quick action! those quick reflexes are reflective of a naturally good heart ???? and that's just science boo

Seriously thank you so much for not even hesitating to save that dog ????

Mr Mathis also revealed on Twitter that the dog's owner, who has been receiving backlash online, was "bawling her eyes out" when the elevator came down.

"She started screaming as soon as the door shut and was bawling her eyes out when it came back down, she thought the worst," he wrote.

To CNN, he said that the woman thanked him for rescuing her dog. "I think she just said 'thank you' and we hugged but she was just so overcome with emotion," he said.