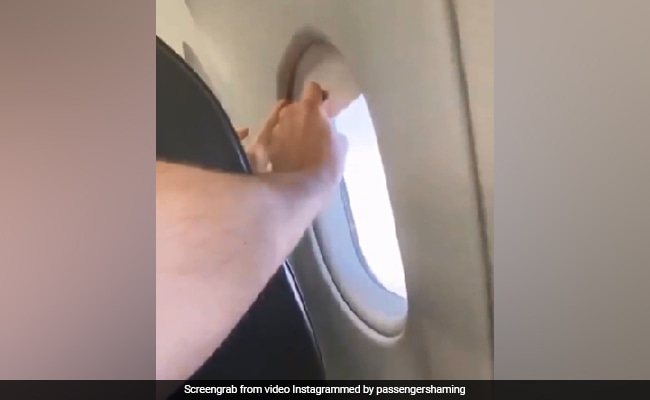 A viral video shows two men engaged in a fight over a window shade.

A video that is going viral online shows two men engaged in a ridiculous fight over an airplane window shade. While it is normally accepted that flight passengers will control the window right beside them, a man in this video is seen trying to close the shade of the window in front of him.

In the video, the man who is filming the whole incident is seen repeatedly trying to close the window shade of the row in front of him. "I want this down," he is heard saying again and again as the man sitting next to the window opens the shade again and again.

"I really want it down. It's too bright," the man filming the video says. The fight escalates to the point where a flight attendant has to be called to intervene.

The video was shared on the popular Instagram account 'Passenger Shaming', where it has been viewed more than 4 lakh times and has garnered over 2,000 comments in just a day.

In the comments section, many have called the fight "immature". Others have sided with the man in front, while a number of commenters have also pointed out that the man trying to shut the shade clearly has his own window shade open.

"The guy behind shouldn't be doing it. He's instigating a fight," said one person. "Why is he shutting someone else's blind when his is open?" another asked.

"I think the guy filming just wants a video for the internet. He's being ridiculous," a third commenter wrote.