A flying bug, an exploding swimming pool and a sweet hummingbird - all on the list of the top 10 most viral TikTok videos of 2019. 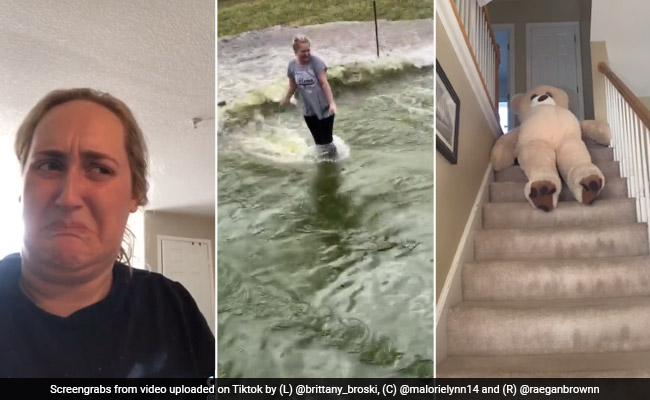 It's safe to say that 2019 was the year of TikTok. Millions of people from around the world used the video-sharing app to post short, often funny clips and take part in viral challenges. TikTok, owned by Chinese tech company ByteDance, skyrocketed in popularity in 2019, and has even been credited for launching the careers of viral musicians like Lil Nas X. To bring in 2020, TikTok has released a year-end round up, curating the best of 2019 on the app.

Here are the top 10 most viral TikTok videos of 2019. Going by the videos here, it seems like TikTok users love hilarious videos. Take a look at the videos that, in the platform's own words, "were born on TikTok and are now immortalized in the 2019 TikTok hall of fame."

A video of a man in a teddy bear costume coasting down a flight of stairs was the tenth most viral clip on TikTok. Watch till the end for a hilarious, random twist.

A video that will make you say "What is happening here?", followed closely by "Why is it happening?"

1.5 million 'likes' for this sweet video of a tiny hummingbird.

This clip of Brittany Broski drinking kombucha, a fermented drink, became a viral meme that you must have seen on social media.

6. This cat has the moves

A confused but adorable cat, dancing for TikTok, became the platform's sixth most viral video. It has collected 2.2 million 'likes'.

TikTok star Sammie Lewis earned the fifth spot on this list with her viral video.

We're all brave until the cockroach starts flying. This funny video is proof.

This exploding swimming pool video has collected more than 7 million 'likes' and thousands of comments on the video-sharing app.

2. They did surgery on a banana!

This video is strangely heartwarming and might just make you go "aww".

Popular YouTuber David Dobrik had the year's most viral TikTok video. The video, which has collected a whopping 17.5 million 'likes', shows him doing the elephant toothpaste science experiment at a grand scale.

Which of these TikTok videos did you like best? Let us know using the comments section.