Read inOther Languages
This Article is From Sep 15, 2020

"Matt was a little startled yesterday while taking a rest by the pool," wrote his wife. 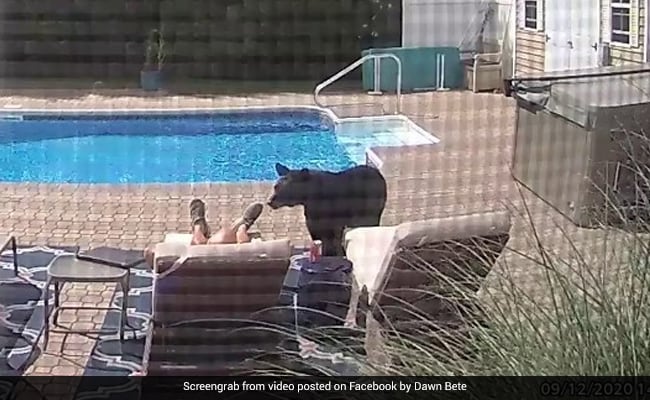 Matt Bete was woken up by a bear nudging his foot.

A Massachusetts man was woken up from his nap by a bear nudging his feet. Matthew Bete, of Greenfield, was sleeping by his pool on Saturday when a bear walked in through an open gate, reports the Daily Mail. Footage captured by security cameras show the bear walking around and even taking a sip of water from the pool before approaching Mr Bete.

The animal proceeded to stare at the sleeping man before gently nudging his feet - startling him awake.

Surveillance footage shows the bear scurrying away as soon as Mr Bete woke up. As the Massachusetts man reached for his phone to click a photo of the bear, the animal darted away before eventually fleeing the house.

According to Mass Live, he was able to snap one photograph of the bear, which he shared with his wife Dawn Bete. "He texted me a picture of the bear running through the front yard and said the bear nudged his foot while he was sleeping by pool," Dawn Bete told MassLive

Ms Bete also shared CCTV footage of the encounter on Facebook, where it has left many amazed. "Matt was a little startled yesterday while taking a rest by the pool," she wrote. Watch the video below:

"Holy smokes! That's a little too close," wrote one Facebook user in the comments section, while another said, "So scary."

Massachusetts says that black bears continue to expand their range in the state. The statewide population of bears is estimated to be over 4,500 animals.