"Mumbai Police team ran behind the train to stop it." 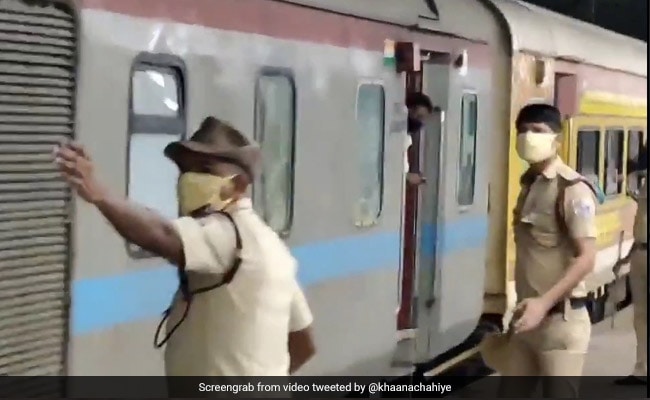 Cops in Mumbai were filmed helping migrant workers board a train.

Cops in Mumbai were filmed helping migrant workers board a train in a video that is winning hearts online. The cops reportedly ran after a "Shramik Special" train travelling from the capital of Maharashtra to West Bengal and flagged it down, allowing a batch of migrant workers to get on board at the last minute. Shramik trains are being operated to help migrant workers, pilgrims, tourists, students and others stranded in different parts of the country amid the coronavirus-induced lockdown.

A video of the heartwarming incident was tweeted by a citizen group working to fight hunger in Mumbai, called 'Khaana Chahiye'. According to their post, the incident occurred when a batch of migrant workers arrived late to the station and were left behind by the last train going to West Bengal.

"Mumbai Police team ran behind the train to stop it," the citizen initiative wrote on Twitter, adding that their volunteers - who had been distributing food at the station - also helped the migrant workers by ferrying their luggage to the train. The video shows loud cheers of "Mumbai Police Zindabad" filling the platform as the workers managed to board their train to Howrah in West Bengal.

As the last train to West Bengal left, a group got left behind as they arrived late@MumbaiPolice team ran behind the train to stop it & citizen volunteers from 3 teams raced across the platform with the passengers luggage. Did they make it?#Khaanachahiye#MumbaiFightsCovid19pic.twitter.com/0V5oBJ2wwm

The video has been viewed nearly 17,000 times on Twitter since being posted on Monday. It has also collected a number of responses from people praising and thanking the cops for ensuring that no man got left behind.

Ofcourse humanity is there in the ground level. Hats off to Mumbai police.
A big salute!!!

The Railways has operated 4,155 Shramik Special trains ferrying more than 57 lakh migrant workers since May 1, according to a report by news agency PTI. The trains are being operated primarily on the request of states that want to send migrant workers stranded due to the COVID-19 lockdown back to their native places.