The leopard was rescued with the help of a wooden ladder. 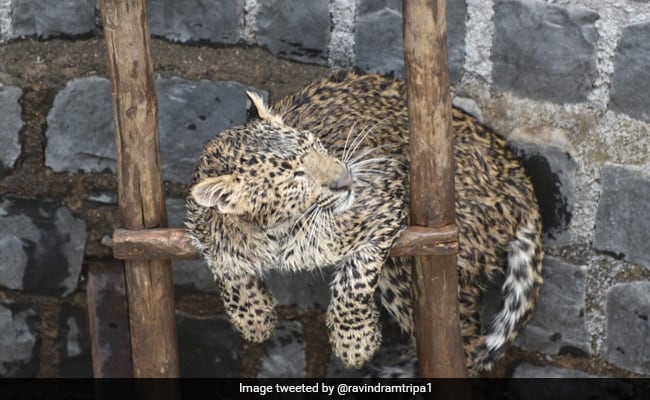 A leopard climbed out of a well using a ladder in Madhya Pradesh.

A leopard that fell into a well in Madhya Pradesh recently was rescued with the help of a ladder. Several videos and photos of the big cat trapped inside the water well surfaced online on Sunday, where they are being widely circulated. News of its subsequent rescue elicited much praise for the Forest Department on social media.

According to veteran Congress leader Digvijaya Singh, who shared a video of the leopard on Twitter, the incident took place in the Kherai Village of Raghogarh. In his video, the leopard can be seen inside the well, trying to climb out, as a crowd of spectators and police personnel gather outside.

The video has been viewed nearly 4,000 times on the microblogging platform, with some Twitter users expressing concern for the big cat.

More photos of the big cat's rescue operation were shared by Indian Forest Services officer Ravindra Mani Tripathi. Mr Tripathi revealed that the leopard was rescued with the help of a wooden ladder in an operation that he described as "creativity at its best".

According to him, to rescue the leopard, a wooden ladder was lowered into the well for the leopard to climb out. Sure enough, after a few minutes, the leopard climbed out on its own and ran into the forest.

"A wooden ladder was tied along the wall and leopard climbed after few minutes and gone to the jungle," wrote the IFS officer while sharing three photos - two of the leopard on the ladder and one of it running away.

#Creativity at its best..

A great leopard #Rescue in Aaron range of Guna #forest division of MP.
A wooden ladder was tied along the wall and leopard climbed after few minutes and gone to the jungle.@rameshpandeyifs@dipika_bajpai@htTweets@IndiaToday@NatGeoIndia@JohnObergpic.twitter.com/lGby2p1yld

The coronavirus lockdown and the resulting silence seems to have triggered a spurt in the attacks on humans by wild animals as they are often found entering the human habitats in and around the forest areas, officials in Madhya Pradesh said on Friday.

"The silence in the adjoining urban areas has apparently given a mistaken sense of expanded territory to the wild animals. They venture out of their territory, sometimes misled by prevailing pin-drop silence due to the lockdown," an official said.

The forest cover of Madhya Pradesh is 77,482.49 sq km, which is 25.14 per cent of the state's total geographical area, a central government report has said. The last three weeks have marked unusual activity with wild animals increasing found entering the human habitats.