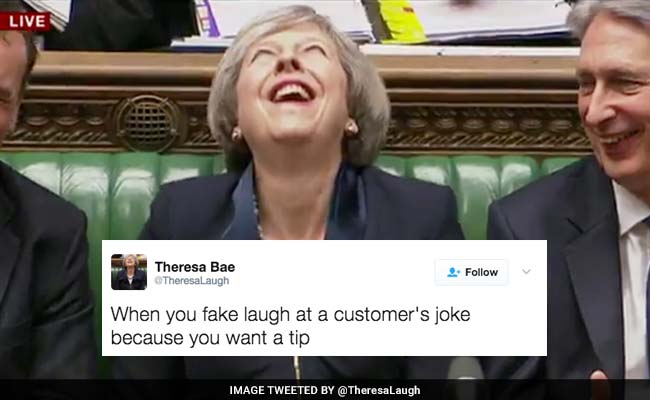 'Laughing Theresa May' recently became a favourite meme on Twitter.

New Delhi: The Prime Minister of the United Kingdom, Theresa May, found herself to be the subject of Twitter's relentless trolling on March 8. A short clip of her throwing her head back and chuckling, shoulders heaving, soon found itself to be Twitter's favourite meme. Ms May was seen throwing her head back and laughing during the Prime Minister's Questions (often abbreviated as PMQs) in the House of Commons. The reason for her mirth seems to be Jeremy Corbyn's comment: "The text, Mr Speaker, said there was a memorandum of understanding, the PM said there was no deal, she is now unclear about this."

The leader was accused of being 'unclear' about whether there was a 'sweetheart deal' with the Surrey Council.

While many accused her of feigning her laugh, calling it 'pantomime' laughter, some compared it to a comic 'supervillain's laugh.' Most agreed that the clip was indeed meme-worthy.

You can check out the funniest memes below:

Well that was a meme waiting to happen #pmqs#theresalaughspic.twitter.com/sVc4SqSp0v

When you said there was no secret sweetheart deal with @SurreyCouncil but you & your mates know there was.#TheresaLaughs#PMQspic.twitter.com/eKqHrUZXub

3. Some were vicious with their jokes

When the homeless man asked Theresa for a fiver #theresalaughspic.twitter.com/jVXMZ5R0c1

You will pay more so we can cut you millionaire boss' corporate tax! #Budget2017pic.twitter.com/8ODPaKMoMA

SPAD: So he says something about terminally ill kids or whatever, then you laugh. Keep it natural. Got it?

5. Some went straight to Photoshop... and nailed it

Did anyone else see Theresa May eating a fish during PMQs earlier? #PMQs#Budget2017pic.twitter.com/HJdIvR2hJo

6. President Trump managed to get trolled here as well

Every UK citizen when they realise that at least they don't have Trump pic.twitter.com/CCSIHFzwO8

7. Some netizens could relate

When you fake laugh at a customer's joke because you want a tip pic.twitter.com/t4OxSMcaod

8. And others drew comparisons

Where have I seen that laugh before? #PMQspic.twitter.com/VBKsfQqxDY

9. People were not happy

Some people just want to watch the world burn...
Or laugh during important, life changing debates whilst dodging questions.#PMQspic.twitter.com/mt3reuIlm7

What do you think of the latest political meme? Let us know using the comments section below.
Comments
Theresa May Laughing