Read inOther Languages
This Article is From Aug 17, 2020

"Ferdinand the Bull wasn't clowning around when he chased FF's down the road," the fire department tweeted. 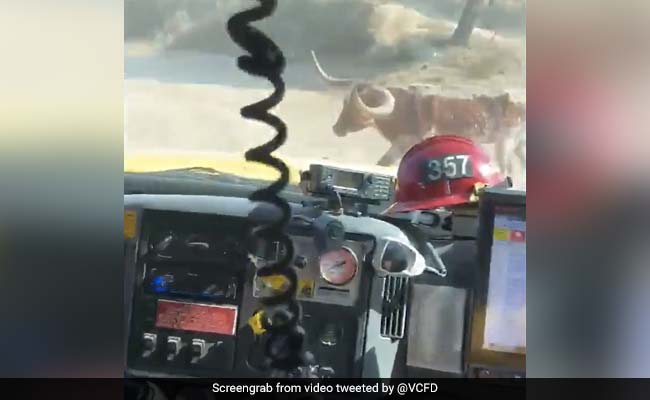 A bull was filmed chasing a group of firemen in California.

Fire, smoke and now Ferdinand the bull. Firefighters working to contain the blazing Lake Fire in Southern California on Friday faced an obstacle of a different kind - an angry bull chasing them away. A group of firefighters were seen running away from the raging bull in a video shared on social media by the Ventura County Fire Department.

According to USA Today, the Lake Fire is a Southern California wildfire that spread to more than 18,000 acres over the weekend. Raging north of Los Angeles near Lake Hughes, the Lake Fire has destroyed over 20 structures and forced many locals to evacuate the area.

Southern California crews battling the Lake Fire on Friday, however, were forced to fight more than just the blaze - they also had to contend with the presence of an unhappy bull, locally known as Ferdinand. A now-viral video shared by Ventura County Fire Department on Friday shows its crew members fleeing the bull with massive horns as it chased them down a road.

"Ferdinand the Bull wasn't clowning around when he chased FF's down the road," the fire department tweeted. "Crews were clearing the road so the engines could get to a clearing when they are chased out. Luckily no one was injured and #Ferdinand went about his day."

#LakeFire; Ferdinand the Bull wasn't clowning around when he chased FF's down the road. Crews were clearing the road so the engines could get to a clearing when they were chased out. Luckily no one was injured and #Ferdinand went about his day. @VCPFA#vcfdpic.twitter.com/vxdOTFoEB7

Since being posted on Twitter two days ago, the video has collected nearly 30,000 views and a ton of comments.

Yes he's a local to our lake hughes community. everyone was worried about him.

"The bull was in the bushes and came out to challenge the firefighters," said Ventura County Fire Department spokesman Andy VanSciver told NBC News. "Like, 'This is my dirt.'"