The couple got married on October 3, 1992, after three years of dating. 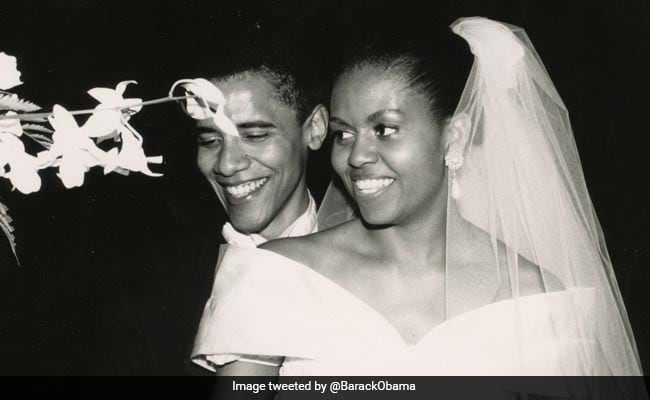 The Obamas have always given us couple goals.

Mr and Mrs Obama are one of the most beloved couples who often indulge in some romantic public display of affection. The former first couple in the United States has always been vocal about their love for each other and their 30th wedding anniversary was the perfect occasion to express some more love. The former US President Barack Obama posted a heartfelt note along with personal photographs, including one from their wedding.

The beloved couple got married on October 3, 1992, after three years of dating. In the caption, Mr Obama wrote that Mrs Obama looked "exactly the same" even after 30 years of their marriage. Mr Obama posted two pictures, one a recent picture from a beach, and another showing the couple happily posing for the camera at their wedding.

"Miche, After 30 years, I'm not sure why you look exactly the same and I don't. I do know that I won the lottery that day-that I couldn't have asked for a better life partner. Happy anniversary, sweetheart!"

Miche, After 30 years, I'm not sure why you look exactly the same and I don't. I do know that I won the lottery that day—that I couldn't have asked for a better life partner. Happy anniversary, sweetheart! pic.twitter.com/sYGKPOff1O

Michelle Obama also took to social media to show love for her husband. She wrote, "Happy anniversary to the man I love! These last 30 years have been an adventure, and I'm grateful to have you by my side. Here's to a lifetime together. I love you, @BarackObama!"

Social media users also wished the couple, a user wrote, "Happy anniversary First Lady and President Obama. May you have more decades of happiness ahead. Thank you very much for your many years of public service & being a great all-around example for millions of people from different backgrounds and stations in life. Very proud of you!"

Another commented, "Honorable Michelle Ma'am and President Obama Sir, wishing you Happiest 30th anniversary, with all my love to the strongest, kindest, modest, humble, creative, generous, optimistic, courageous couple I know who work for humanity. God bless you always and all peace."

The Obamas have always given us couple goals. They have been married for 30 years now and still are so in love with mutual respect and admiration for each other. Post-retirement, they have been travelling and relaxing. They are also focusing on their non-profit organization, the Obama Foundation.