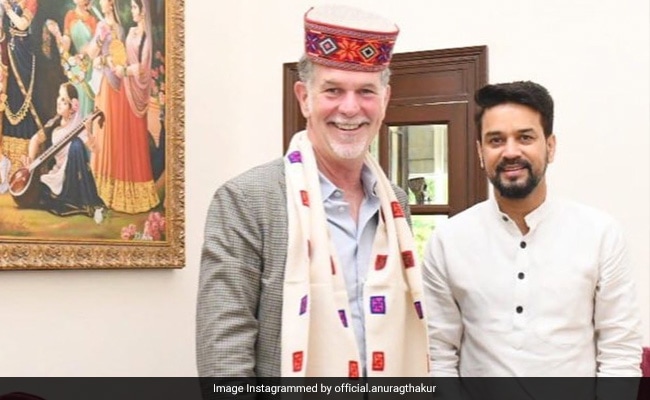 Union Minister of Information and Broadcasting Anurag Thakur met the co-founder of Netflix, Reed Hastings, for a discussion this morning. Mr Thakur also presented Mr Hastings, the co-founder and co-CEO of Netflix, with a copy of the Bhagavad Gita during their meeting. Sharing two photos from the meeting on social media, the union minister said they had a productive discussion on what India has to offer the world in terms of consumer content.

"Good discussion with Mr Reed Hastings (Co-Founder & CEO Netflix)," Mr Thakur wrote while sharing the pictures on Instagram. "Today consumers of content are traveling the world through stories; India offers a variety of opportunities and ideas - in multiple languages," he said.

Mr Thakur added that he presented the Netflix co-founder with the Bhagavad Gita - a sacred scripture in Hinduism which literally means "the song of God".

True!"@iamnikhilnanda: Gift of "bhagwad Geeta" best gift fr it teaches us eternal ways of life relevant in all times http://t.co/jc2HjMzUo3"

The government in November put OTT platforms such as Netflix as well as news and current affairs content on online platforms under the Ministry of Information and Broadcasting and gave it powers to regulate policies and rules for the digital space.