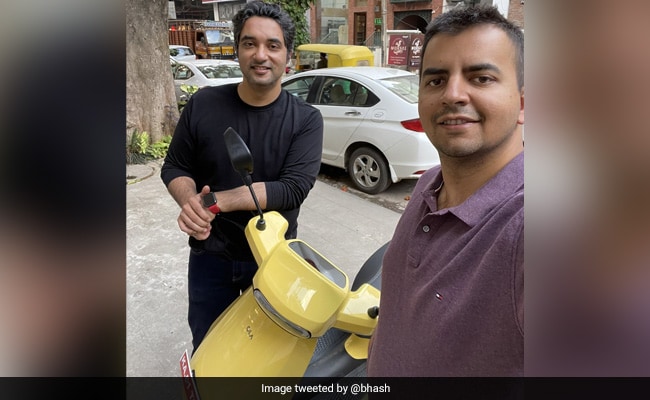 Anand Mahindra sits on the board of directors for Araku Coffee

Ola CEO Bhavish Aggarwal on Thursday stepped out for a cup of coffee at Bengaluru's Araku Cafe - and got the nod of approval from Mahindra Group Chairman Anand Mahindra for his choice. Mr Aggarwal, whose company recently launched its first electric scooter, shared a picture with the Ola Electric S1 at the Araku Cafe in Bengaluru's Indiranagar area. "Me and Varun Dubey getting a coffee with the Ola Electric S1 at Araku Coffee in Indiranagar, Bangalore," he wrote while sharing a picture on Twitter with Ola's Chief Marketing Officer.

The pic was soon spotted by Anand Mahindra, who called it a smart move on Mr Aggarwal's part to choose Araku Cafe. He also asked the Ola CEO to check the cafe out instead of standing outside.

"Smart move @bhash," wrote Mr Mahindra, tagging the Ola CEO in his tweet. "Araku cafe is the coolest location you could have selected. Make sure you don't just stand next to your scooter all the time. Scoot inside the cafe and check it out," he added.

Mr Mahindra sits on the board of directors for Araku Coffee - a brand that was founded to provide employment opportunities to tribal youth in Andhra Pradesh and has since won global recognition. The initiative to promote the brand worldwide was spearheaded by the Naandi Foundation, which also has Mr Mahindra as one of its directors.

In his tweet, Mr Mahindra added: "All of us at @naandi_india & @arakucoffeein are incredibly proud of it!" - referring to the cafe.

In response, Mr Aggarwal said he was already a regular at the cafe. He also praised the service and the coffee as he wrote: "I'm probably the most regular customer already Sir! Great brand, product and service."

The exchange between the two business tycoons came after the CEO of Naandi Foundation, Manoj Kumar, shared a tweet of appreciation for Bhavish Aggarwal. "When we said that @arakucoffeein Cafe in Bengaluru will be a destination, @bhash has made it happen at a new level - the Cafe is the destination for show casing the Power of New India," he wrote on Twitter. It was his tweet that Mr Mahindra responded to.

When we said that @arakucoffeein Cafe in Bengaluru will be a destination, @bhash has made it happen at a new level - the Cafe is the destination for show casing the Power of New India???????? ! See how @OlaElectric unveils their electric scooter - confluence of iconic brands! ♥️ https://t.co/YcGG6RTqHG

Araku Valley Coffee was established to uplift the disadvantaged tribal farmers in Araku Valley, located in the Eastern Ghats. The initiative to take Araku Coffee to global consumers started in 2008, with the establishment of Araku Originals by the Naandi Foundation. In 2018, Araku Coffee also won the gold medal for best coffee pod in the 2018 Prix Epicures OR in Paris.