Sunday morning saw Borivli roads choked as chariots rolled out of the ground and the diksha ceremony began. The individuals, who are now on the road less travelled, flung their material possessions to members of the surging crowd. 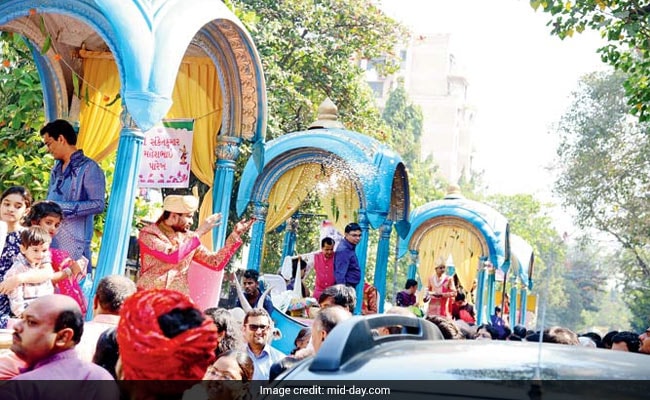 Men took diksha ride on chariots, throwing their material possessions away into the crowd.

A hush seems to have fallen over Borivli's Chikoo Wadi as a four-day mammoth festival - Vijay Prasthan Utsav that literally means 'path to victory' - ended yesterday. Locals saw thousands of visitors throng the neighbourhood for the Jain spiritual festival, which began on January 19, at the Shimpoli cricket ground. It featured 16 young men and women taking 'diksha', where they renounced the material world, freed themselves of all relationships and began a new ascetic life. 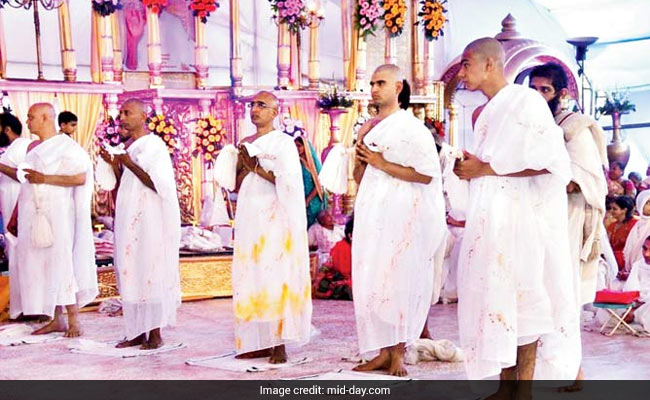 The five men who became sadhus at the Vijay Prasthan Utsav in Borivli.

Sunday morning saw Borivli roads choked as chariots rolled out of the ground and the diksha ceremony began. The individuals, who are now on the road less travelled, flung their material possessions to members of the surging crowd.

Drashti Dedhia of Matunga, who is now Saadhviji Divyanidhi Shreeji, in all-white, hair gone, is unrecognisable from the young woman with heavy ornaments who had sat before this reporter and said just two days before she took diksha, "This is all about getting something that is more supreme than what I have now." 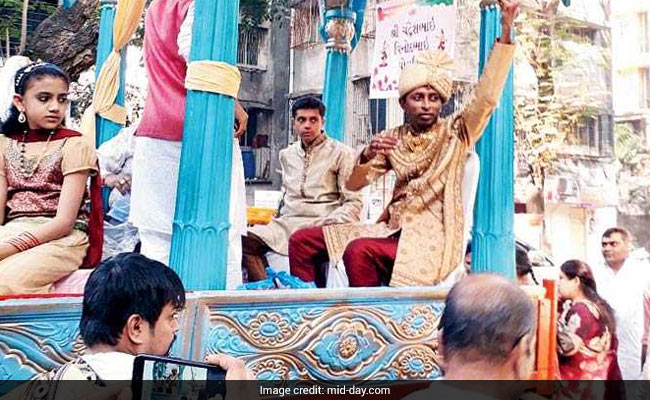 Those who took diksha ride on chariots, throwing their material possessions away into the crowd.

"I call this path that I have chosen as independence, I will be breaking free of all that; I am not scared at all; in fact, I am excited," the law student had added. Saadhviji Vairagyanidhi Shreeji was Viral Dedhia, when she'd spoke to us, saying she has traded her dream of being a research scientist for "another journey". 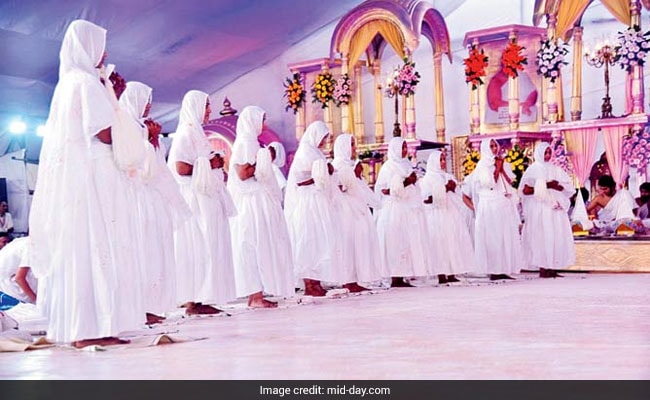 The 11 women who took diksha and have now become saadhvis.

Viral, who lives in Ghatkopar and is a Bharatnatyam dancer, will now follow the music of her heart, "one of independence and freedom from all desires", as she put it. Dedhia, who has a masters in biochemistry, said, "These are the logical steps I have taken on a journey of the soul. The way to ultimate happiness is to become free."

Sneha Katariya from Bengaluru left behind her "bank balance and job at investment giant Goldmann Sachs with complete understanding and support of my family, who are of the opinion that I can go where I find my happiness." Now reborn, so to speak, as Saadhviji Dakshnidhi Shreeji, white shod, barefooted, she has taken her first steps to happiness.

Pareen Shah, now Saadhviji Prashamnidhi Shreeji, a web designer from Sarvodaya Nagar in Mulund, said, "I will get peace and happiness on this journey. When we sacrifice desire, then, there is no pain."

The Lodaya family, young parents and their teenage daughter, had just 24 hours together as a family before beginning diksha. Pritesh Lodaya from Chopdagam in Jalgaon district, whose family has an electronics business, was leaving everything behind for a "higher calling, which only in-depth religious study can teach you".

His wife Hemal said "true devotion" is the aim, while their daughter, Yashika, added, "There is no ideal age for this; you have to take diksha when you are prepared."

Pritesh has now become Munishree Prashambhushan Vijayji, while Hemal is Saadhviji Harshnidhi Shreeji, and the teenager is Saadhviji Yugnidhi Shreeji. The family is no longer one unit; they have renounced all ties with each other. They are now individuals who will go their separate ways.

After four days of frenetic zeal, it was business as usual for Borivli. Luxurious cars moved out of the venue, signalling the end of the festival. Autorickshaws buzzed madly, carting other visitors to the railway station.

Promoted
Listen to the latest songs, only on JioSaavn.com
For these 16, their roads may never cross, but they are, the wise say, on the path that has been carved by H H Acharya Yugbhushan Suriji who said, "The fearless adopt the path of diksha, not to win the world, but to conquer thyself."

(Except for the headline, this story has not been edited by NDTV staff and is published from a syndicated feed.)
Comments
BorivliMumbai Jain Monk