On Sunday, two Kerala Youth Congress workers - Kripesh and Sarath Lal - were hacked to death by a group of men while they were riding a motorcycle 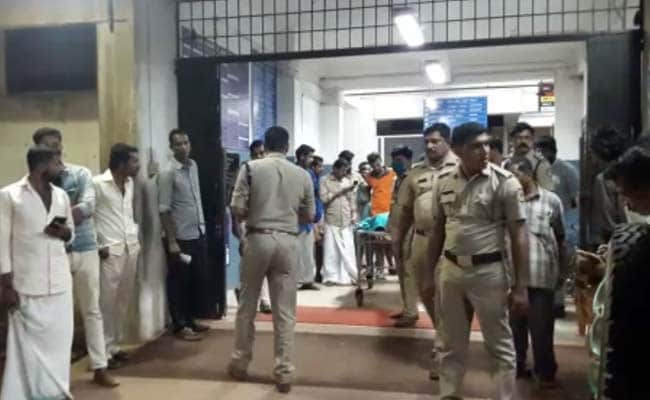 Kerala Youth Congress killing: The police said they are looking for more accused

A leader of the Communist Party of India (Marxist) from Kerala has been arrested for the murder of two Youth Congress workers in Kasaragod district, the police said on Tuesday. CPM local committee member A Peetambaran has also been suspended from the party, the CPM said.

The police said they are looking for more accused. On Sunday, two Youth Congress workers - Kripesh and Sarath Lal - were hacked to death by a group of men while they were riding a motorcycle in Kerala's northern-most district, Kasaragod.

The Kerala Governor has sought a report from Chief Minister Pinarayi Vijayan on the killings.

Sought from Chief Minister @CMOKerala an urgent report on the present stage of the Police investigation into the murder of two youth Congress workers near Periya in Kasaragod on Sunday night. The OppositionLeader Shri Ramesh Chennithala,@chennithala met me today pic.twitter.com/MhSUDDNswo

The Congress alleged the murders were a conspiracy backed by the CPM. Party president Rahul Gandhi tweeted:

The brutal murder of two members of our Youth Congress family in Kasargod, Kerala is shocking. The Congress Party stands in solidarity with the families of these two young men & I send them my deepest condolences. We will not rest till the murderers are brought to justice.

As Kerala's Left government is finishing a thousand days of governance, the Congress has hit out at the state government for political murders. "There have been 29 murders in thousand days of CPM-led governance. The straw government has shown no political will to stop this. What mistake did the two young Youth Congress workers do, for them to be killed so brutally, with the backing of the CPM?" Opposition leader Ramesh Chennithala told NDTV.

A top police source said several people are being questioned. "This incident happened at a secluded place, with no eyewitnesses. We are making strong progress in the case. Some people whom we have questioned have CPM affiliations," the police source said.

Mr Vijayan said the murders were "extremely unfortunate". "And no one Kerala is going to accept this. Strong action will be taken against the accused. CPM as a party has nothing to do with this murder," he told reporters.

Ramesh Chennithala called off the reception of his newly wed son, and has offered the money that was to be spent on the reception as aid to the family of the two Youth Congress workers who were killed.

"I visited the house of Kripesh and SharathLal. The situation in their homes were heart wrenching. The families of both the boys are financially unsound and need help from all quarters. Kripesh was the lone breadwinner of the one room thatched hut. We should not allow the families to be left alone in this time of extreme grief. I firmly believe that the people at large will stand with the UDF to support the families of the Youth Congress workers," Mr Chennithala said.

The Congress has also announced financial help of Rs 25 lakh to their families.