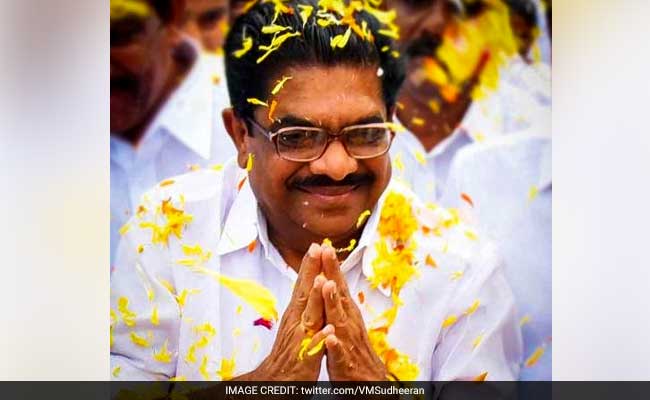 Senior Congress leader VM Sudheeran, who has resigned from the AICC and KPCC political affairs committee over his differences with the state unit of the party, on Monday complained to the central leaders about the "wrong style of functioning" of the new state leadership and sought the high commands intervention.

He raised the issue when Tariq Anwar, AICC general secretary (in-charge of Kerala), met Mr Sudheeran at his residence here to placate the protesting party veteran.

Talking to reporters after his meeting with Mr Anwar, Mr Sudheeran said he stuck to his resignations and urged the AICC leadership to address the concerns he had raised with them on the organisational matters in the state.

"The new leadership took charge in the state with great hopes. But things didn't go well as expected. The wrong working style of the leadership and other issues...I hope the AICC will take a correctional step to rectify the mistakes made by the state leadership and I have requested the same. I do not intend to change my stance at all. I have resigned from both the posts," Mr Sudheeran said.

He expressed happiness over Mr Anwar's visit and thanked him. Mr Anwar visited Mr Sudheeran hours after the news broke about his resignation from the AICC.

Mr Sudheeran expressed happiness over Mr Anwar's visit and thanked him but said he was not willing to withdraw the resignation.

Mr Anwar said his discussion with Mr Sudheeran was very useful and he has great respect for him.

"I am sure, whatever he suggested, I take it very seriously. In future I will try to rectify those things," Mr Anwar told reporters.

Mr Anwar, who is currently visiting the state to sort out the organisational matters, also met former KPCC president Mullappally Ramachandran who has also expressed displeasure over the style of functioning of the new state unit under KPCC Chief K Sudhakaran.

"In my political career, I never had to wait for a slot to meet the KPCC president. I will be the last person to do so," Ramachandran said, taking a dig at the style of functioning of Sudhakaran.

After meeting Anwar, Ramachandran also said that there were no discussions happening in the party after the new leadership took charge.

Mr Sudheeran's resignation from the two key party committees has come as a jolt for the newly constituted state unit led by its president K Sudhakaran and Leader of Opposition in the state Assembly, VD Satheesan.

On Sunday, Satheesan had met Sudheeran as part of the state Congress leadership's efforts to pacify the veteran.

Chennithala said the Congress party and its followers should move forward for the sake of Kerala.

"We need to move together for the sake of party in Kerala. I have requested the AICC to create an ideal situation for the same. AICC should take steps to bring together all the leaders of the party," Chennithala told reporters.

Since the new leadership of the Congress party took power under K Sudhakaran, senior leaders, including Chennithala, Ramachandran and former chief minister Oommen Chandy, have expressed displeasure over the party's working style.

A few leaders, including KPCC general secretaries, have already quit the party over issues related to the reshuffling of the party's district units.