Karnataka Rains: The coastal regions and the northern parts of Karnataka bordering Maharashtra and Kodagu have been particularly badly affected

Karnataka Weather Update: The water level in many rivers is above the danger mark.

Heavy rains across several districts in Karnataka, especially areas near the coast, have led to water level rising in the rivers. The state government has opened the gates of a massive dam in Uttar Kannada district to release water and avoid flooding the banks of the Kalinadi and Kadra rivers. Water from other dams has been released too.

The water level in many rivers is above the danger mark. Chief Minister BS Yediyurappa, who is being treated for COVID-19 infection in a hospital, has released Rs 50 crore for initial flood relief work amid the coronavirus pandemic. More funds will be released, he said.

Deputy Chief Minister Ashwath Narayan said the state had prepared well ahead of the rains. "We will ensure people are safe. We have alerted people living in low-lying areas. The Chief Minister is also monitoring the situation from hospital," Mr Narayan said.

The districts that saw heavy rains are Kodagu, Gokarana, Chickmangaluru, Hassan and Mysuru.

The coastal districts of Uttara Kannada, Dakshina Kannada and Udupi have been badly hit, with the adjoining Kodagu district also bearing the brunt of heavy rains. Belgavi, which borders Maharashtra, and other northern districts are also badly affected. 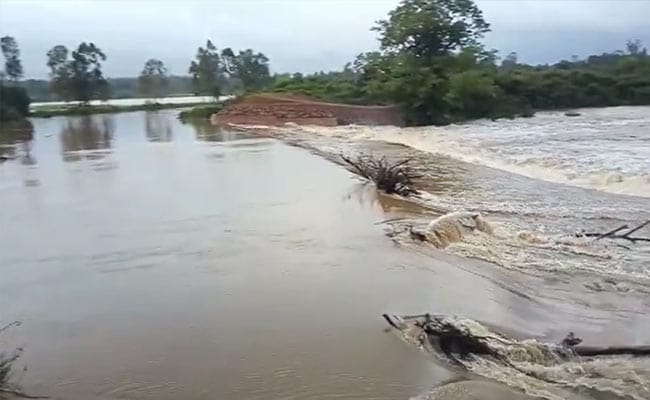 Several areas in Kodagu, the source of the Cauvery river, are flooded

More heavy rains and thundershowers have been forecast in the state.

Several areas in Kodagu, the source of the Cauvery river, are flooded. Landslides have been reported from the Goa-Karnataka border.

Last year also, Karnataka was hit by floods - and the first task of Mr Yediyurappa as he took over from the Congress-Janata Dal Secular coalition government - was to travel to the districts to oversee flood relief work.

Mr Yediyurappa has asked ministers to remain in their constituencies and visit damaged areas. He also asked them to run relief distribution and other measures. The ministers are free to take independent decisions on emergency work, Mr Yediyurappa said.

The Congress alleged the BJP government is not helping people amid the heavy rains. "There is heavy downpour in various parts of Karnataka, disrupting livelihoods of many people. The government has failed to come to their rescue. Do we even have an existing government?" former chief minister and Congress leader Siddaramaiah said.

"Government should immediately take decisions to ease the burden on people during these floods. They should identify shelter homes and relocate people from the risky areas," he said.

In neighbouring Maharashtra, heavy rains brought Mumbai to a standstill on Wednesday. The weather office has forecast more rains today, though the situation has improved a bit and suburban trains are running.

In Kerala, the IMD said "very heavy to extremely heavy rainfall" is expected till August 9. It has warned of heavy rains specifically in Wayanad and Kozhikode.