The dateline on the stone inscription clearly states that this belonged to the times of Tuluva king Krishnadevaraya of Vijayanagara empire. 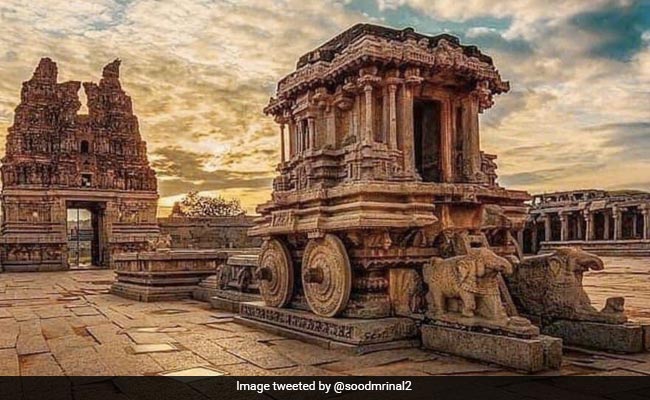 The Vijayanagar Empire was based in the Deccan Plateau and established in 1336. (Representational)

A stone inscription belonging to 15th century Vijayanagara empire was found in Nandanavana village of Byndoor taluk in Udupi district in Karnataka.

The inscription was found on a land owned by Sanjeeva Prabhu and is inscribed in Kana stone. The inscription which is 5 feet tall and 2.5 feet wide has 38 lines in Kannada.

On either side of the Vamana idol on the top end, conch, chakra, sun and moon are carved. It has a headline, 'Swasti Sri Ganadhipataye Namah' and the date is mentioned as 1442 Varthamana Pramadhi Samvatsarada Shravana Shuddha 15 Budhawara which means August 21, 1519 AD.

The dateline on the stone inscription clearly states that this belonged to the times of Tuluva king Krishnadevaraya of Vijayanagara empire. During the period, Barakoora state was ruled by Vijyappa Odeya, son of Ratnappa Odeya.

The inscription is a prayer for the long life and prosperity of ruler Vijayappa Odeya. The inscription had also received a donation from Keshava Upadhyaya, son of Eshana Upadhyaya of Angirasa Gothra, the release said.