Yogi Adityanath, With Bat In Hand, On A Cricket Ground 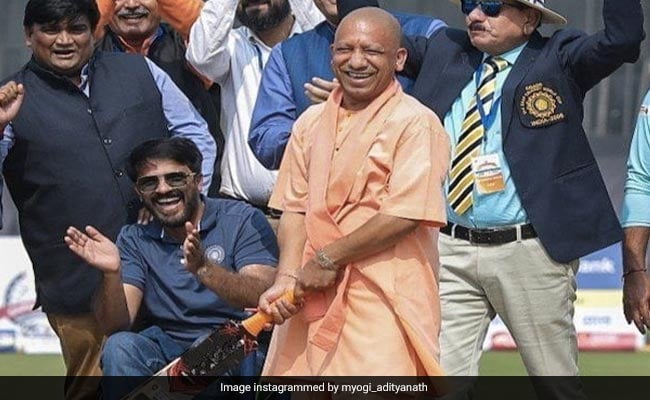 Yogi Adityanath enjoying his day out on a cricket pitch

A picture of Uttar Pradesh Chief Minister Yogi Adityanath playing cricket has surfaced on the Internet. It was clicked after he inaugurated the Sardar Patel National Divyang-T20 Cup in Lucknow on Monday.

In a photo, shared by the official Instagram handle of the Chief Minister, Yogi Adityanath is seen holding a bat. “ In Lucknow today, on a cricket pitch...” the caption read.

In a video shared on Twitter by the news agency, the Chief Minister swings the bat and hits the ball. He is surrounded by a group of officials and staff on the cricket ground.

Speaking about the tournament, Yogi Adityanath told ANI, “Many programs are going on since morning today to pay tribute to the architect of modern India. I am delighted to see that after 'Run for Unity' in 75 districts, a cricket tournament has been organised. I congratulate all the participants, organisers and sponsors for it.” He added that the tournament will be the biggest for specially-abled cricketers in the country.

The tournament will witness the participation of 20 teams from across the country. They will be segmented into four groups and will play a total of 43 matches. The players will get match fees and their travel expenses will also be covered. In addition, exceptional performers will also be provided nearly Rs 30 lakh in prize money. The closing ceremony of the tournament will be held on November 7, the report added.

Earlier this month, Yogi Adityanath inspected the Gorakhpur Zoo where he fed milk to a leopard cub. In a video, the chief minister is wearing protective gloves and trying to feed the animal.