Video: YouTuber, Molested In Mumbai, Thanked Man Who Came To Her Rescue

The Mumbai police have arrested the two men, and the Korean woman has said the police acted swiftly. 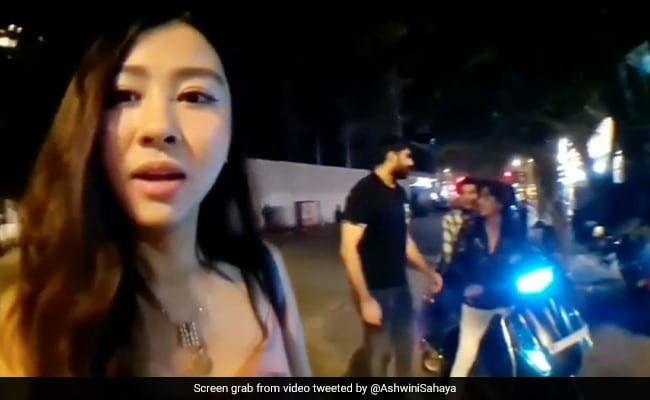 The video clip shows what happened after the woman was molested.

The South Korean woman who was molested by two men in Mumbai was rescued by a local man who was watching her live-stream, new video footage shows.

The video clip, posted by Twitter user Girish Alva, shows what happened after the woman was molested. An Indian man can be seen telling the woman that he was watching her live-stream and rushed to the spot. He can be seen talking to the two accused, asking them to not harass the woman. They eventually leave after the man's intervention, and the woman thanks him profusely.

"Mumbai is really safe, and I think he also didn't have a very bad intention," she says towards the end of the clip, while walking with the man who came to the rescue.

Korean Youtuber was molested during live streaming, by Shaikh & Ansari in Mumbai. They were later arrested.

Here's what happened immediately after the incident.

One guy who was watching her live stream, came to rescue her. She thanked him saying "mumbai is pretty much safe" pic.twitter.com/1zmdTOBWbt

The Mumbai police have arrested the two men, and the Korean woman has said the police acted swiftly.

Speaking to NDTV yesterday, the woman had said she was walking back to her hotel when two young men yelled at her on the road and tried to kiss her.

"I tried my best not to escalate the situation. He started to grab my waist and drag me to his motorcycle. I wasn't feeling comfortable and said I'm not comfortable," she narrated, adding that they tried to follow her and asked for her phone number as well. "I gave them a fake number, so they would leave," she said.

She said she was satisfied and happy with the action taken by the Mumbai Police, as she has faced similar situations in other countries, where there were no repercussions.

"I will not leave India, I will not let this ruin my trip," she said, adding that she has met many"amazing" people in this country.