The 3 Judges At The Centre Of Karnataka Political Thriller 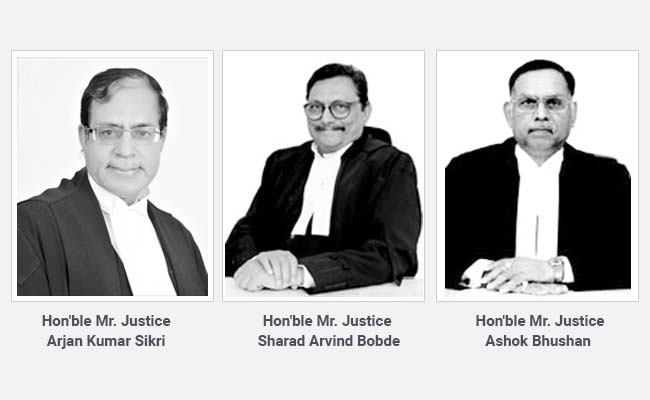 New Delhi: The Supreme Court, which yesterday ordered newly sworn-in Karnataka Chief Minister BS Yeddyurappa to face the test of strength at 4 pm today, will shortly hear the Congress's plea to cancel the appointment of BJP's KG Bopaiah as the interim speaker for the floor test.

A bench of Justices AK Sikri, SA Bobde and Ashok Bhushan in a historic overnight hearing on Thursday had allowed Mr Yeddyurappa's swearing-in a few hours later, but said the formation of the new government would be subject to the final outcome of the case.

Let's take a look at who these judges are:

Arjan Kumar Sikri was sworn in as the Supreme Court judge on April 12, 2013. Earlier, he had served as the Chief Justice of the Punjab and Haryana High Court. Born on March 7, 1954, Justice Sikri enrolled as an advocate in July, 1977 with Bar Council of Delhi and started practicing in Delhi. Conducted cases of all types with specialization in Constitutional cases, Labour - Service Matters and Arbitration Matters. Was counsel for numerous Public Sector Undertakings, Educational Institutions, Banks & Financial Institutions and various Private Sector Corporations. Was also part-time lecturer in Campus Law Centre, Delhi University (1984-89). Was Vice-President, Delhi High Court Bar Association during 1994-95. Was member of the Governing Body of various colleges from time to time. Designated as Senior Advocate by Delhi High Court on 30th September, 1997.
Appointed as Judge of High Court of Delhi on July 7, 1999. As a Judge, dealt with all kinds of jurisdictions and given many landmark judgments. Has attended/ chaired various national and international seminars and workshops and presented number of papers therein. Many articles are published in various magazines.

He was chosen as one of the 50 most influential persons in Intellectual Property in the world in the survey conducted by Managing Intellectual Property Association (MIPA) for the year 2007.
Justice Sikri became the acting Chief Justice of Delhi High Court on October 10, 2011 and was elevated as the Chief Justice of Punjab and Haryana High Court  in September 2012.
He was elevated to the Supreme Court of India on April 12, 2013.
Has been conferred Doctorate of Laws, Honoris Causa, by Dr. Ram Manohar Lohiya National Law University, Lucknow, in November 2013.

Justice Ashok Bhushan elevated as Judge of the Supreme Court of India on May 13, 2016. He was the 31st Chief Justice of Kerala High Court.
Born on July 5, 1956 in Uttar Pradesh's Jaunpur to Shri Chandrama Prasad Srivastava and Kalavathi Srivasthava, Justice Bhushan graduated in Arts in the year 1975, Obtained Law Degree in 1st Division from the Allahabad University in the year 1979.
He was enrolled as an advocate with the Bar Council of Uttar Pradesh on April 6, 1979.  Thereafter, started practice on Civil and Original side at Allahabad High Court till the elevation to the Bench. Worked as Standing Counsel of Allahabad University, State Mineral Development Corporation Limited and several Municipal Boards, Banks & Education Institutions. Elected as Senior Vice-President of the Allahabad High Court Bar Association.  Elevated as permanent Judge of the Allahabad High Court on April 24, 2001.  Served as Chairman, Higher Judicial Service Committee and headed several other committees.
Comments
Supreme CourtKarnataka floor test