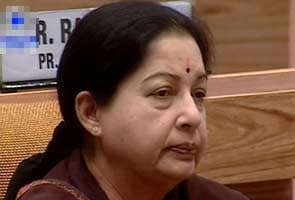 Chennai: Tamil Nadu Chief Minister J Jayalalithaa has written to the Prime Minister and sought his intervention in mitigating her state's power crisis. Tamil Nadu is crippled by a severe shortfall of power with most parts of the state going without electricity for upto 16 hours a day.

Ms Jayalalithaa has sought a reallocation of power that the Delhi government plans to surrender and an additional 1000 MW to provide some relief to people in her state.

Tamil Nadu faces a shortfall of about 4000 MW; during peak season the state needs 13500 MW of power but manages only 9500 MW.  Power cuts in Chennai -- which till a week ago went without electricity for just one hour a day -- has doubled.

The government is looking at the nuclear power plant at Kudankulam as a possible solution. It is due to generate 1000 MW starting December. The long power cuts have added a conspiracy angle to the controversy already raging over the safety of the plant. Anti-nuclear protesters say that the power cuts are to influence public opinion in favour of the plant. Off the record, key officials in the state government deny this allegation. The state government, they say, is banking on more upcoming power projects to beat the crisis. The AIADMK government constituted a committee last week headed by power minister Natham Viswanathan to resolve the deepening crisis and expedite upcoming power projects.

Promoted
Listen to the latest songs, only on JioSaavn.com
Last October, Chief Minister J Jayalalithaa had assured stable power supply in six months, but things are only turning worse. A similar situation had contributed to the DMK's crushing defeat in the last election. With Lok Sabha polls due in 2014, the two Dravidian arch rivals have already begun to blame each other of not doing enough to add adequate power generation infrastructure. But for the common man in Tamil Nadu, it seems the "powerless" nightmare would continue till at least the beginning of next year.