State Of Ties Will Reflect State Of Border: Foreign Minister On China

In an interactive session at the Hindustan Times Leadership Summit, he said the two countries cannot have a "tense, high-friction border" and have great relations in other areas. 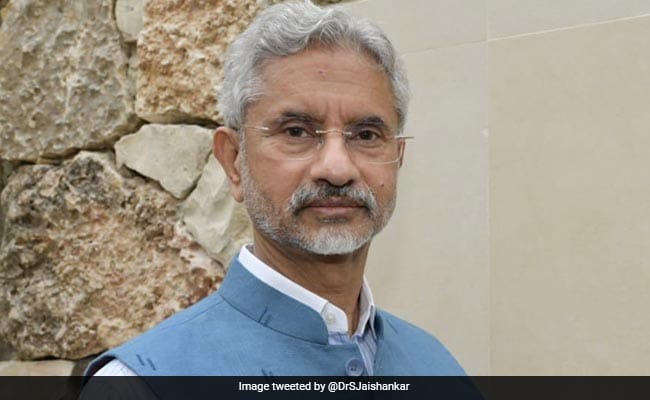 You can't have a tense, high-friction border and have great relations, said S Jaishankar (FILE)

The state of the relationship between India and China will reflect the state of the border, External Affairs Minister S Jaishankar said on Thursday, referring to the lingering standoff in eastern Ladakh.

In an interactive session at the Hindustan Times Leadership Summit, he said the two countries cannot have a "tense, high-friction border" and have great relations in other areas.

Mr Jaishankar said it is not a realistic expectation to carry on with the relationship when there is a tense border and asserted that questions like why it happened and what does it reflect are completely legitimate.

"And as we have made clear -- the state of the relationship, at the end of the day, will reflect the state of the border. You can't have a tense, high-friction border and have great relations in all other parts of life. It does not work that way," he said.

"It is inevitable that this will sort of spill over, it has already spilt over into other domains and the expectation that somehow we will contain it in a narrow sense and carry on with the rest of life, I think, is not a realistic one," the external affairs minister said.

"We do have a significant issue there for us and also for them because I frankly don't think it is in the interest of either country that our relationship goes off in this direction," he added.

Referring to China bringing in forces to the border that triggered the row, Jaishankar said the neighbouring country violated commitments.

"In terms of bringing forces to the border, it is not an impression that we had or we thought we had an understanding. We had it in cold print in two agreements. So there is no ambiguity on that score," he said.

"There were very, very clear-cut commitments not to mass forces on the border and those commitments stand violated as of 2020 spring," the minister said.

He said the issue at the end of the day is that the sight of woods should not be lost for trees, adding, "I think the trees are individual incidents or attempts to unilaterally change the status quo or to violate the LAC (Line of Actual Control)."

Mr Jaishankar said the troops of both sides are deployed "sometimes uncomfortably closely" and discussions are going on between the two countries to resolve the issues.

Asked about the situation in Afghanistan, he said the United Nations Security Council Resolution 2593 was an expression of widespread concern in the world on a set of issues.

The UNSC resolution, adopted on August 30 under India's presidency of the global body, talked about the need for upholding human rights in Afghanistan, demanded that Afghan territory should not be used for terrorism and that a negotiated political settlement to the crisis should be found.

Mr Jaishankar said the most prominent of the issues was would the Afghan soil be used by terrorists and foreign fighters to target other countries. Also, the nature of the regime in Afghanistan, would it be inclusive, and the nature of governance, the treatment of women, children and minorities, freedom of movement for Afghans, he said.

"I would say a lot of those concerns...remain live concerns," he added.

Mr Jaishankar said India has been deliberative about its choices in Afghanistan and careful about assessments and is not being led by arguments that others are doing it.

On the humanitarian situation, he said the general consensus has been that there is a need to do something for the Afghan people, notwithstanding the difficult situation.

The minister said India offered to send 50,000 tonnes of wheat to Afghanistan and favoured unhindered access to the country, besides pitching for distribution of supplies in a responsible and fair manner.

Asked about the Quad, he said, "It is for something, it is not against somebody."

He said the agenda of the Quad is focussed on COVID-19 vaccines, trusted and secure technologies, promoting reliable and resilient supply chains, connectivity projects and ensuring maritime security and safety.

Asked what India will bring to the "Summit of Democracy" being hosted by the United States, Mr Jaishankar said he is "very confident" about the state of the Indian democracy.

He said Indian elections and the electoral process are not in doubt, and popular participation in elections is rising.