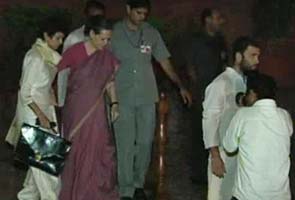 New Delhi: Sonia Gandhi, the president of the Congress, was admitted tonight at Delhi's AIIMS hospital after she complained of chest pains, said a spokesperson for the hospital. Her children Rahul and Priyanka are with her, according to the Press Trust of India.

Mrs Gandhi was taken to AIIMS from Parliament; she left during voting on amendments to the food security bill, a welfare scheme she has championed ardently. In a rare speech today, she urged parties to unanimously support a "chance to make history" by clearing the food security bill that legally entitles 67 per cent of India to cheap food.

The AIIMS spokesperson said that she had been taken to the Intensive Care Unit as a precaution, but said there was "nothing serious" about her condition. Congress leader Ambika Soni said "routine tests are being conducted." Janardhan Dwivedi said the party president, 66, may have had an allergic reaction to medicine given to her.

The Prime Minister was a late-night visitor; he was reportedly driven in through a gate at the back of the hospital. The police cordoned off a 500-metre stretch leading to the Intensive Care Unit to allow a steady stream of VIPs. However, sources said, most visitors were not allowed to see Mrs Gandhi.