Rescuing a submarine and its sailors: India practices with US help 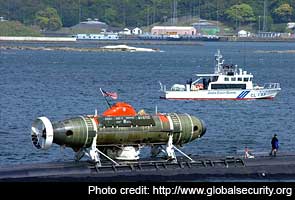 New Delhi: What happens if one of India's 15 submarines malfunctions underwater and sinks with its crew on board? As India is forced to operate an aging fleet - some over two decades old - the prospect of facing such a situation is almost real. It is perhaps to address this gap that for the first time India-US will be carrying out an exercise to rescue its trapped submarines. This is first that the Indian Navy will carry out such a complex exercise.

The Indo-US submarine rescue exercise named 'INDIAEX-2012' will start tomorrow and is likely to continue for nearly a month. During the exercise, four Indian submarines are likely to sail into the Arabian Sea off the coast of Mumbai and simulate a distress situation.

The Deep Submergence Rescue vehicles ( DSRV) of the US Navy's Undersea Rescue Command will then get into action and try to pull out the trapped sailors.

"The exercise will be carried out at various depths and differing conditions," a senior Navy officer told NDTV. In a complicated operation, once the distress signal is received, the Indian Navy will use the last known positions, route map, speed and other parameters to try and establish the likely location of the submarine in trouble.

That information will be passed onto the US team, who will then make a dash to the spot and lower a DSRV, which is essentially a mini-submarine equipped with robotic arms, underwater cameras and pressurized chambers capable of transporting about 20 -22 sailors at a time.

DSRVs can operate up to a depth of about 610 meters underwater.

Currently, Indian submarines depend on pressurized escape suits and deep sea divers to rescue submarine crews. But this procedure to evacuate trapped sailors is effective in only in very shallow depths.

On August 12, 2000, K-141 Kursk of the Russian Navy - perhaps the biggest nuclear-powered attack submarine - sank following two explosions on board. All the 118 sailors on board died in the accident. Nine days after the incident, when Russia finally accepted international help, deep sea navy divers reached the boat on the sea-bed to find that 23 sailors including the captain had escaped the first explosion and secured themselves in the stern of the boat. But by the time the navy divers reached them, it was too late.

India operates a submarine fleet of 15 including a recently-acquired nuclear-powered hunter killer submarine from Russia - INS Chakra. The indigenously-produced INS Arihant is capable of carrying nuclear warheads and is likely to start its sea trials soon. And by 2015, India is likely to get the first of the much-delayed Scropene submarines from France. The Navy will get a total of six Scorpene submarines by 2020 if there are no further delays.

Promoted
Listen to the latest songs, only on JioSaavn.com
The Indian Navy's effort to procure its own DSRV has been struck in bureaucratic delays for years. As an alternative, it entered into an agreement with the Undersea Rescue Command of the US Navy in 1997. But it's only now that the deal is being implemented.

Last year, India has floated the first "Request for Proposal (RFP)" to purchase a DSRV. "A Russian and British firm has responded to the RFP and negotiations are at a very preliminary stage" officers told NDTV.
Comments
submarine rescue exercise