With A Tilak And Swastika Symbol, Rajnath Singh Flags Off K-9 Vajra Gun

The gun that was flagged off by Rajnath Singh weighs 50 tonnes and can fire 47kg bombs at 43-kilometre distant targets. It can also turn around at zero radius. 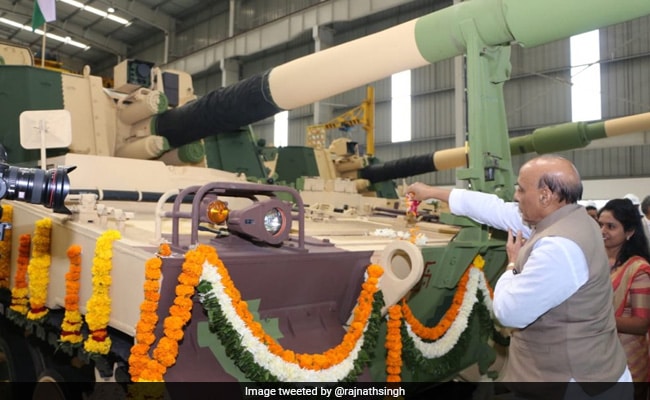 Rajnath Singh, during the puja, also offered flowers to the gun and broke a coconut.

Defence Minister Rajnath Singh today flagged off the 51st K-9 Vajra-T gun at the Larsen and Toubro Armoured Systems Complex at Hazira, Surat. The L&T officials showed the minister the different manoeuvres of the K-9 Vajra-T, a tracked self-propelled howitzer. Mr Singh sat in the vehicle on which the gun was mounted and was driven around the Hazira complex.

The gun weighs 50 tonnes and can fire 47kg bombs at 43-kilometre distant targets. It can also turn around at zero radius.

L&T had in 2017 won the Rs 4,500-crore contract from the Ministry of Defence to supply 100 units of K9 Vajra-T 155 mm/52 calibre tracked self-propelled gun systems to the Indian Army under the Centre's "Make in India" initiative.

The K9 Vajra contract involves delivery of 100 such systems in 42 months, which is the largest contract awarded to a private company by the Ministry of Defence.

The Defence Minister also put 'tilak' and drew the auspicious 'swastika' symbol with kumkum on the new artillery. During the puja, he also offered flowers to the gun and broke a coconut.

Scoping out the K9 Vajra-T guns at ACS in Hazira. These future ready combat vehicles meet the requirements of 21st century warfare, including deep fire support with its longer firing range. pic.twitter.com/TV8qvvAgxY

Mr Singh said in his speech that he salutes the commitment and hardwork of employees of L&T as the company's Hazira complex is a sign of "new thinking of new India".

"I see this complex has a new and astonishing achievement... There were many sectors in India where private sector's participation was almost nil. Defence sector was one such example," he said.

Under the 'Make in India' scheme, the government has taken many steps that will make the country a net exporter of arms in future, he said.

The minister said the government has simplified the process of giving licences for defence manufacturing, established two defence industrial corridors and created a defence investors cell at the Ministry of Defence.

The ASC is a state-of-the-art complex to manufacture and integrate advanced armoured platforms. pic.twitter.com/G2piAr1Nji

"Today, when I saw the K-9 Vajra-T gun, I could see strong gun, but more than that, I could see a strong India... In defence, this is a brilliant example of Make in India," he said.

The government will try its level best to remove all roadblocks that are coming in the industry's way of indigenous defence manufacturing, he said.

JD Patil, senior executive vice-president for the company's defence segment, as well as AM Naik, chairman of the company, were present at the event.

"L&T has always been at the forefront for all the national causes...We collaborate with the DRDO and the armed forces to understand their requirement," Mr Naik said in his speech.