Rahul Gandhi's attack picked up from where party colleague P Chidambaram left off yesterday. Mr Chidambaram told NDTV that the country should not "blame God for a man-made disaster" - a two-in-one swipe at Finance Minister Nirmala Sitharaman's "act of God" remark and the sharp fall in GDP. 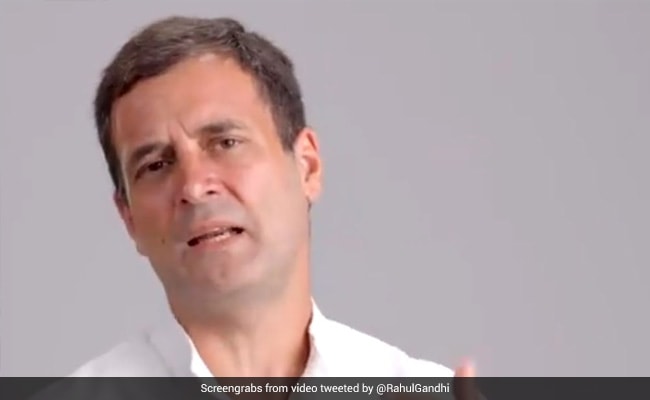 Congress leader Rahul Gandhi kept up his attack on the government Wednesday - two days after a record drop in GDP amid the coronavirus crisis and as Chinese forces continue to engage in provocative military action in Ladakh - with a list of "Modi-made disasters" to have affected India.

Mr Gandhi's attack picked up from where party colleague P Chidambaram left off yesterday; Mr Chidambaram told NDTV that the country should not "blame God for a man-made disaster" - a two-in-one swipe at Finance Minister Nirmala Sitharaman's "act of God" remark and the sharp fall in GDP.

India is reeling under Modi-made disasters:

The fall had been suggested by current Finance Minister Nirmala Sitharaman during a GST Council meeting last week; she'd said: "...This year we are facing an extraordinary situation. We are facing an act of God where we may even see a contraction".

Also on Monday the government said Chinese troops had once again engaged in provocative action along the south bank of Ladakh's Pangong Lake.

Since May, Chinese forces have repeatedly transgressed into six areas along the disputed Line of Actual Control in eastern Ladakh. In June, 20 Indian soldiers were killed in action in Galwan Valley.

Mr Gandhi has repeatedly warned the government over both crises.

The Covid lockdown, which has been in place since March and is being eased through a series of "Unlock" periods ("Unlock4" is currently in force), has been linked to a number of problems for the economy, including unemployment.

Mr Gandhi's reference to 12 crore unemployed was drawn from a May report by Bloomberg, which cited a World Bank study that said daily wage labourers and poorer people were among the worst affected.

The lockdown and its impact on the economy has also affected tax collection, with the centre struggling to repay GST dues to state governments.

India is the third worst-affected country by the Covid pandemic; nearly 70,000 new cases were reported in the previous 24 hours, the government said this morning, taking the total number past 37.7 lakh. Over 66,000 people have died after being infected by the virus, so far.

In a video posted on Twitter, before the government confirmed a massive fall in GDP, he said the economy was "witnessing a slowdown for the first time in 40 years " because the informal sector was being "attacked".

The former Congress chief has frequently advised the government to consider immediate social welfare measures to help the poorer sections of the society - those worst affected by the lack of economic activity during the lockdown and with little, if any, liquidity to help them through these difficult times.

He has also urged the government to consider, among other measures, direct cash injections to the poor, arguing that increased spending is the more effective way to jump-start the stuttering economy.