DS Dhesi claimed it was unfortunate that rumours were being spread against farmers in the state when they were hardly to blame for Delhi's deteriorating pollution levels. 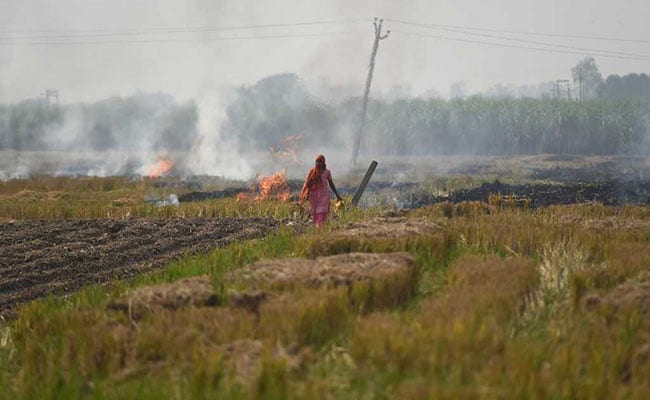 Haryana Chief Secretary DS Dhesi on Sunday said it was unfair to blame its farmers for Delhi's poor air quality when farm waste on just 1 per cent of the total area sown with paddy was burnt this year.

"Last year, farm waste was burnt on just 2 percent of the total sown area of paddy, and the figure further fell to 1 percent this year. However, it is being projected as if our farmers are burning farm waste in each and every field," an official release quoted him as saying at an event in Hisar.

Mr Dhesi claimed it was unfortunate that rumours were being spread against farmers in the state when they were hardly to blame for Delhi's deteriorating pollution levels. "Paddy is sown on 13 lakh hectares across 10 districts of Haryana. As per data provided by HARSAC (Haryana Space Applications Centre), farm waste burning cases were reported from 12,473 places in 2017. This year, such incidents were reported from 7,273 places -- which is only one percent of the total area under paddy cultivation," he said.

Efforts are on to further reduce such instances, the Chief Secretary said, referring to the farm waste-based compressed biogas plants that are likely to be established at Kurukshetra, Kaithal and Jind. "Apart from this, the Indian Oil Corporation and the Renewable Energy Department have signed a memorandum of understanding aimed at purchasing farm waste from farmers to generate energy," he added.

Two committees will also be constituted to monitor sensitive villages between October 15 and November 25, a 40-day-long period when most cases of the crop-burning incidents are reported, said Mr Dhesi. He said that issuance of challans to violators was not enough; the police should also register cases against them. The Haryana State Pollution Control Board would send cases of those burning farm waste to the courts for trial, he added.

On October 30, the National Green Tribunal (NGT) had asked the Delhi, Haryana, Punjab and Uttar Pradesh governments to ensure that its farmers do not cause a spike in pollution levels by burning farm waste. A bench headed by NGT Chairperson Justice Adarsh Kumar Goel also asked the state governments to provide machinery that would help poor and marginal farmers remove the farm waste without having to set it on fire.

The air quality in Delhi remained severe on Sunday despite measures such as extension of the ban on the entry of trucks, construction and polluting industries. The overall air quality index was recorded at 423, according to data from the Central Pollution Control Board.