These posters have been plastered on walls on major thoroughfares, markets, public places in Rae Bareli like Tripula square and Hardaspur. 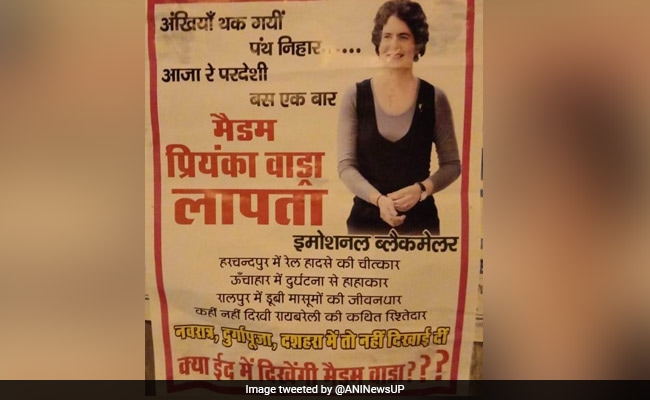 The posters which literally cropped up all around the Uttar Pradesh town overnight, showed her as "missing", and said while many tragedies struck the constituency since her last visit, Ms Vadra has not bothered to reach out to the people in the Congress borough where she is seen as her mother's heir.

In a reference to her last minute visits to Rae Bareli during successive polls and trying to pitch in for her mother by striking the emotional chord of the relationship of the Gandhis with the area, the posters also called her an "emotional blackmailer".

They said Ms Vadra plays with the sentiments of the Rae Bareli people only to garner votes.

Carrying pictures of Congress President Rahul Gandhi's sibling the posters also asked her when she would visit Rae Bareli next.

These posters have been plastered on walls on major thoroughfares, markets, public places in Rae Bareli like Tripula square and Hardaspur.

They questioned her absence after major train accidents, including at Harchandpur, and the NTPC blast in Unchahar.

They posed queries whether she would be present in her mother's constituency on Eid since she has not turned up on Hindu festivals like Navratri, Durga Puja and Dusshehra.

Congress leaders and workers called the posters yet another "dirty trick" by opponents who were petrified by the "comeback prospects of the Gandhis and the party to power in 2019 (after the Lok Sabha polls)".

District Congress chief VK Shukla said the party will give a befitting reply to such slandering. For now they would ask the district administration to act against people involved in putting up the posters, Mr Shukla said.