In Meeting With Top Bureaucrats, PM Modi Gives Out A Goal For Next 5 Years

The Prime Minister also asked top bureaucrats to prepare a five-year plan for each ministry, with well-defined targets and milestones in sync with the people's expectations. 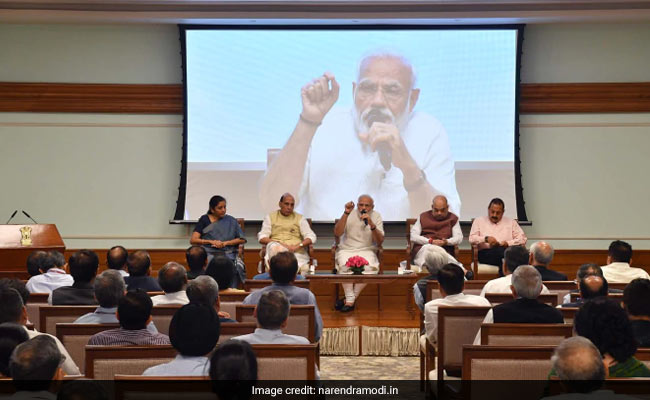 Prime Minister Narendra Modi held the meeting with bureaucrats at his residence on Lok Kalyan Marg.

Thanking bureaucrats for their work which helped his government win a second term, Prime Minister Narendra Modi today said that improving the "ease of living" of people in the country will be the main priority of all ministries under his government in the next five years.

"The mandate (in the recent elections) reflects the will and aspirations of the people to change status quo and seek a better life for themselves. Hence, all ministries must focus on steps to improve their 'ease of living'," a government statement quoted PM Modi as saying in an interaction with top officials at his residence on Lok Kalyan Marg.

The Prime Minister also outlined his government's priorities at the event, which was attended by Union Ministers Rajnath Singh, Amit Shah, Nirmala Sitharaman and Dr Jitendra Singh, among others. "The Indian voter has outlined a vision for the next five years, and this is an opportunity before us. The huge expectations of the people should be viewed not as a challenge but an opportunity," he said.

The Prime Minister also asked top bureaucrats to prepare a five-year plan for each ministry, with well-defined targets and milestones in sync with the people's expectations.

PM Modi also attributed the National Democratic Alliance's victory in the recently concluded Lok Sabha elections to the "hard work" of government officials. "The credit for the recent polls should go to the entire team of officials who worked hard, conceived schemes and delivered excellent results on the ground over the last five years. This time's elections have been marked by a positive vote that emerged from trust that the common man feels on the basis of his day-to-day experiences," he said.

The National Democratic Alliance won 352 of 542 seats in the Lok Sabha elections, leaving just 91 for the rival Congress-led alliance. The BJP also notched as many as 303 constituencies by itself, sending the opposition teethering on the brink of near-irrelevance.

In his address to the bureaucrats, the Prime Minister said that no effort should be spared to ensure that India becomes a 5-trillion dollar economy. "The 'Make In India' initiative will have a big role to play in this regard. You have the vision, commitment and energy to take the country forward, and that makes me proud. We must make full use of technology to improve the productivity and efficiency of each department," he added.

Various officials took the opportunity to share their ideas on subjects such as administrative decision-making, agriculture, rural development, IT initiatives, education reform, healthcare, industrial policy, economic growth and skill development at the event.