Jamia, AMU Crackdown: On Sunday, a massive protest by the Jamia students against the new citizenship law had ended in violence. 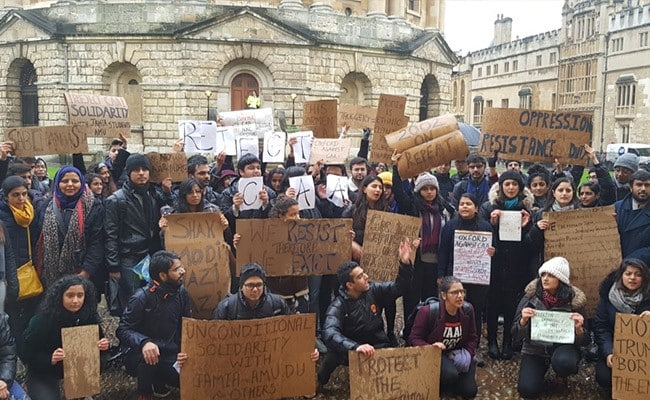 A group of students and scholars of the Oxford University on Tuesday held placards, shouted slogans as they staged a protest march at the varsity premises in UK and condemned Sunday's police clampdown at the Jamia Millia University in Delhi and the Aligarh Muslim University. Calling for the immediate withdrawal of the Citizenship (Amendment) Act that cleared parliament last week, the Oxford students said that the "unconstitutional law upends the long-standing fundamental ideals of equality".

On Sunday, a massive protest by the Jamia students against the new citizenship law ended in violence. Hours later, when Aligarh Muslim University students tried to march against the violence in Delhi, they were lathi-charged and tear-gassed. The protests soon spread across the country. In several cities, including Kolkata and Banaras, students held midnight protests.

Students across the world have expressed concern over the use of police force during these protests. "The use of police force against students exercising their fundamental right to protest in university spaces and elsewhere is a direct attack on the foundations of a democratic society. We demand an immediate end to all forms of violence against the protesting students and call for accountability of those responsible," Oxford students said in a statement.

The new citizenship law "stipulates preferential treatment to religious minorities from Pakistan, Bangladesh and Afghanistan in the process of acquiring Indian citizenship, while explicitly excluding Muslims from its purview," the statement further read. "This explicit and blatant exclusion of Muslims from citizenship upends the long-standing fundamental ideals of equality, liberty, pluralism and secularism enshrined in the Constitution of India," it said.

Over 400 students from different US universities have also issued a joint statement expressing solidarity with the protesters at Jamia and AMU. In the statement, scholars from universities, including Harvard, Yale, Columbia, Stanford and Tufts said they condemn the "brutal police violence unleashed against students at Jamia and AMU as a gross violation of human rights under the Constitution of India and international human rights law".

Students and teachers at Columbia University also condemned the police action. "We refuse to remain silent at the violence unleashed on our colleagues peacefully protesting the imposition of a discriminatory and unjust law," a statement said.

The Citizenship Amendment Act is meant to expedite citizenship for non-Muslims from Pakistan, Afghanistan and Bangladesh who moved to India till 2014 after facing religious persecution in their home countries. Opposition leaders and protesters, however, have claimed that the law affects the fundamental principle of secularism of the nation.