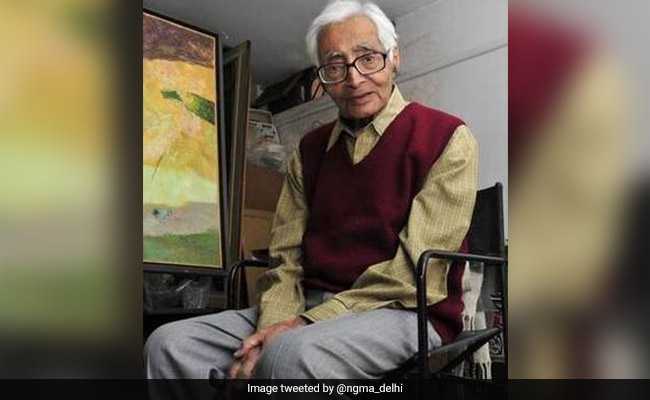 Ram Kumar's death was confirmed by an email statement from City-based Vadehra art gallery, which forayed into publication with a solo show of the artist "Ram Kumar: A journey within" in 1996.

"It is with a heavy heart that we bid a final farewell to one of the greats of Indian art and a dear friend, Ram Kumar. For us at Vadehra Art Gallery we mourn the loss of a mentor and passionate supporter who has been a part of the birth and growth of our gallery," the statement said.

The gallery went on to host 22 solo exhibitions by Ram Kumar over the years.

Arun Vadehra recalls how Mr Kumar's entire life, like his art was a "sadhana".

Born in a large family in Shimla, the artist started off with a degree in Economics at St Stephens College. However, the course of his life took a different turn when he was introduced to art, and decided to go to study it in Paris where he also met fellow painter Syed Haider Raza.

However, it was his visit to Varanasi that would mark a turning point in his life.

In 1960 he travelled to Varanasi with MF Husain, and this magical city would remain his muse for the rest of his life. From here on abstract landscapes became his main subject, rendered time and again as an amalgamation of colours and textures.

Ram Kumar's landscapes often straddle the boundaries between abstraction and naturalism, quoting both but succumbing to neither.

Despite being associated with the Indian modernist scene, the Progressive Artists Group as well as the Delhi Shilpa Chakra, he never easily fit into a simplistic modernist narrative constantly seeking to rediscover elemental origins within the lingua franca of the landscape.

Promoted
Listen to the latest songs, only on JioSaavn.com
He was honored with the Padma Shri by in 1972 and Kalidas Samman by the Madhya Pradesh government in 1986. He was awarded the Padma Bhushan in 2010.

The award-winning painter was cremated at Nigambodh Ghat today. A prayer meeting will be organised on April 17 at Chinmaya Mission here.