The BJP's question over the government's majority arises largely because of the absence of several legislators belonging to the Congress. The state budget will be tabled in the assembly tomorrow. 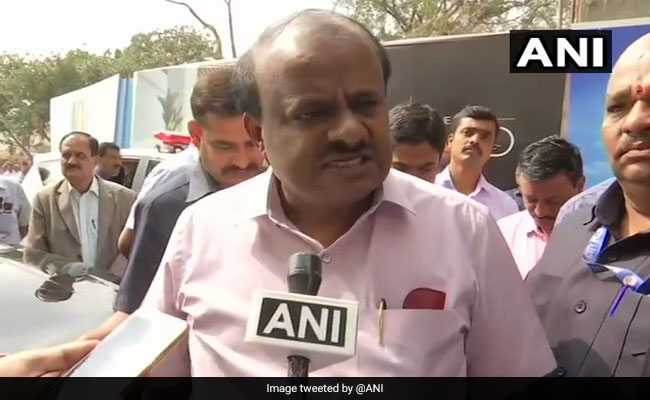 Thursday was the second day of the Karnataka legislature's budget session, but the state assembly had to be adjourned twice after opposition BJP MLAs rushed to the well of the House with claims that the Congress-Janata Dal (Secular) coalition government no longer has a majority. The house will reconvene on Friday morning, when Chief Minister HD Kumaraswamy is scheduled to present the state budget.

The question over the government's majority arises largely because of the absence of several legislators belonging to the Congress - the JDS's coalition partner in the state.

Despite being ordered by Congress Legislature Party chief Siddaramaiah to be present in the House, many legislators continue to stay away. These include four Congress MLAs - Ramesh Jarkiholi, Umesh Jadhav, B Nagendra and Mahesh Kumathihalli - who had also absented themselves from the Congress Legislature Party meet called in December. Another legislator, KN Ganesh, is on the run because he is wanted by police for allegedly assaulting fellow-Congressman Anand Singh.

As no Congress MLA has resigned from the party so far, the coalition still officially has 118 MLAs in a House with a halfway mark of 113. The Congress leadership insists that all party MLAs will be present for the budget.

The JDS also asserted that the budget will be presented on schedule. "In the May 2018 election, the people of the state gave the BJP 104 seats. We formed a coalition with the Congress because 113 seats are needed. The BJP should play the role of a responsible opposition, but they are instead offering Rs 50 crore and Rs 100 crore to our legislators. Prime Minister Narendra Modi and BJP president Amit Shah support this," alleged Karnataka Minister GT Deve Gowda.

The JDS leader criticised the BJP for disrupting assembly proceedings. "They did not allow the Governor -- the very Governor appointed by the centre -- to make his address. Operation Kamala has failed, and the entire country is watching what the BJP is doing. The budget will be presented tomorrow and everything will be passed. Why don't they move a no-confidence motion instead of disrupting the proceedings?" Mr Gowda asked.

He was referring to an incident on Wednesday, when BJP legislators trooped into the well of the house and loudly called on Governor Vajubhai Vala to not deliver his address. "You are made to read lies, so please don't read it," a few of them were heard shouting.

BJP state president BS Yeddyurappa defended his legislators, and insisted that the government does not have a majority. "Karnataka has seen little development in the last eight months, and that is why we boycotted the Governor's address yesterday. The question of moving a no-confidence motion does not arise at all," the former Chief Minister said.

BJP member R Ashok has alleged that superstitious beliefs are behind the ruling coalition's decision to present the budget presentation just after 12.30 pm on Friday. "The budget has always been presented at 11 or 12 o'clock, never like this. This particular time was fixed by HD Revanna, Mr Kumaraswamy's brother, who always has a lemon (to ward off the evil eye) in his possession," he said.

Mr Ashok then went on to claim that everything done by the Congress-JDS government is based on superstitious beliefs. "Where is the money for farm loans - the Rs 40,000 crore farm loan waiver they promised? There is no money. Tomorrow is an astrology budget that's not for the public. There is no government in Karnataka."