Read inOther Languages
This Article is From Dec 17, 2019

Mamata Banerjee was speaking before leading a protest march in Kolkata, her second since yesterday, against the Citizenship (Amendment) Act and the NRC (National Register of Citizens). 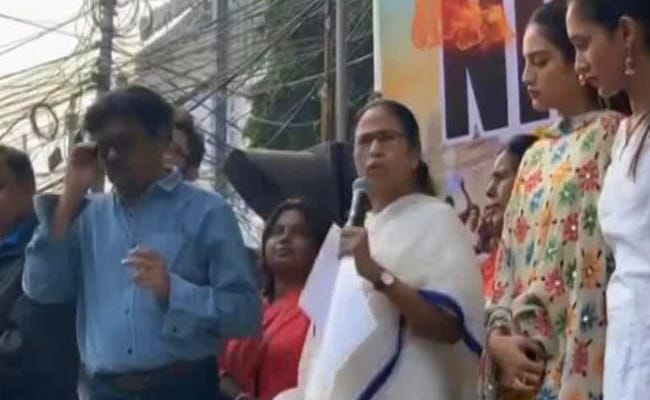 Mamata Banerjee ordered her administration to stop work on the National Population Register.

Mamata Banerjee today took a dig at Prime Minister Narendra Modi, who had said at an election rally in Jharkhand recently that those involved in arson can be "identified by their clothes". The Bengal Chief Minister retorted: "The whole country is burning and they are talking about the clothes you are wearing."

On Sunday, PM Modi had said at a rally in Dumka, Jharkhand: "Congress and their allies are creating a ruckus. They are indulging in arson because they did not get their way. People who are setting fire (to property) can be seen on TV. They can be identified by the clothes they are wearing."

He made the remarks while accusing the Congress and other opposition parties of inciting protests against the citizenship law in the northeast and other parts of India.

"There are protests everywhere. There's no place where there aren't protests. Despite that, at a time like this, a comment on clothes? That you can make out who the protestors are by looking at their clothes? Can you make out what I am wearing? Is it bad? All these people around me...the clothes they are wearing...are they good clothes or clothes or something disgusting," she said.

"Or is it that only those people wear caps on their heads and no one else? Punjabis wear turbans, bishops wear their own clothes, what you wear is up to you, what you eat is your business. Now one of these days they just might tell me, why are you wearing white bath slippers. We will make you some saffron ones. Wear that! Can you make out someone's politics by looking at their clothes."

Mamata Banerjee addressed a rally before going on a protest march in Kolkata, her second since yesterday, against the Citizenship (Amendment) Act and the NRC (National Register of Citizens). She is among the three chief ministers who have said they will not implement the two measures in their states, though the centre has said no state has a choice.

Yesterday, Ms Banerjee ordered her administration to stop work on the National Population Register, which is expected to lay the groundwork for a citizens' list or NRC in the future - an exercise that the centre says is aimed at weeding out illegal migrants.

Ms Banerjee has stepped up protests against the citizenship law as she and her Trinamool Congress fight the BJP's attempts to gain more ground in Bengal ahead of elections due in 2021.

The law makes it easier for non-Muslims from Pakistan, Afghanistan and Bangladesh to get Indian citizenship. Opposition parties believe it discriminates against Muslims.