Sukhram's decision to join the Congress along with his grand-son Ashray Sharma has turned Anil Sharma's continuance as a state minister unpredictable. 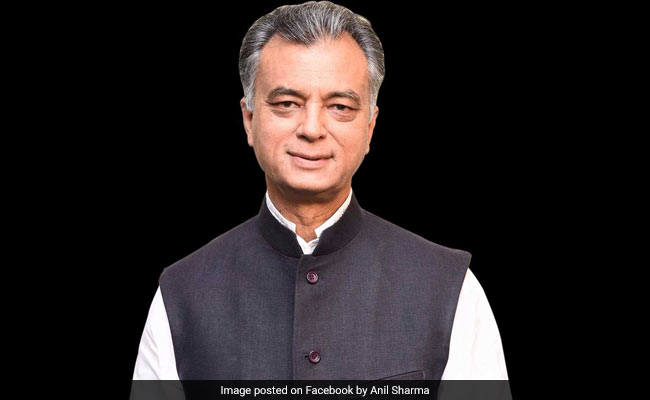 Anil Sharma could not be reached for his comments

With former Union Telecom Minister Sukhram joining the Congress along with his grandson and leaving his son Anil Sharma's political career as a minister in Himachal's BJP government in quandary, the saffron party Monday left it to Sharma to decide whether to continue in the state Cabinet.

"It is for Anil Sharma to decide whether to remain as Himachal Pradesh minister or quit. He should make his stand clear," BJP's state unit president Satpal Singh Satti told PTI.

He was asked if Sukhram's son Anil Sharma, the state power minister, would continue in the Jai Ram Thakur government.

Mr Satti, however, added, "One member of a family may remain in one party, while another may join other party."

Sukhram's decision to join the Congress along with his grand-son Ashray Sharma has turned Anil Sharma's continuance as a state minister unpredictable.

He may soon face the dilemma whether to leave the Cabinet and campaign for his son Ashray Sharma, who is likely to get a Congress ticket for Mandi Lok Sabha seat or or stay put with the BJP and cheer for the party's Mandi candidate Ramswaroop Sharma.

Despite repeated efforts, Anil Sharma could not be reached for his comments on his possible next course of action.

Asked about the prospects Aashray getting a Congress ticket for the Mandi Lok Sabha seat, Mr Satti said instead of giving ticket to those leaders who formally sought it, the Congress first asked its senior leaders to contest from here.

When its senior leaders refused to do so, it is trying to find candidates from here and there, said Mr Satti.

The BJP state president, however, exuded confidence that his party will repeat its 2014 performance on all the four Lok Sabha seats in the state.