According to Jaipur Dairy Federation, milk collection has come down by 15-18 per cent due to Lumpy 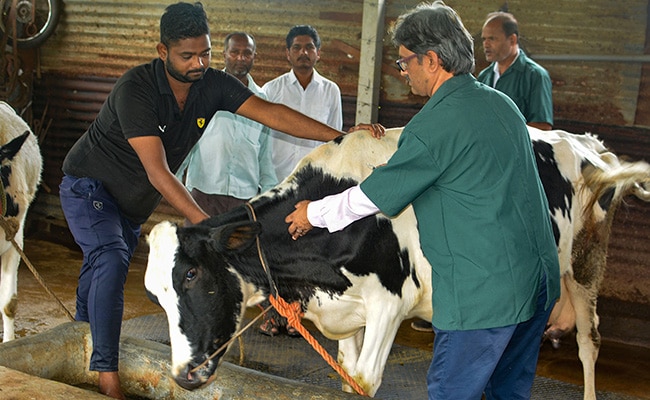 Daily milk collection in Jaipur is down to 12 lakh litres, from the usual 14 lakh litres

With the Lumpy skin disease (LSD) taking its toll on the cattle population in several states, milk collection in Jaipur, Rajasthan, the worst-affected state by the disease, has been badly hit, resulting in a rise in the prices of sweets manufactured in the state. According to Jaipur Dairy Federation, the biggest milk cooperative in the state, milk collection is down by 15-18 per cent, though there has so far been no disruption in supply.

Om Poonia, the Chairman of Jaipur Dairy Federation, said daily milk collection is down to 12 lakh litres, from the usual 14 lakh litres.

"Before Lumpy struck, we used to get 14 lakh litres of milk daily at the cooperative, but now it's down to 12 lakh litres. Though there has been no disruption in milk supply, we are worried over animal deaths as the figures in reality are definitely more than what is being stated officially. If this continues, there could be a crisis - worse than what we faced during Covid-19," said Poonia.

At a Jodhpur sweet shop, supplier Mukesh Kumar Sharma said: "All sweets are made with mawa [dried evaporated milk solids]. With milk supply falling, our production is down to 80 per cent. We have also had to increase the prices of some sweets, especially the milk-based ones, by Rs 20."

Professor Satish K Garg, Vice-Chancellor, University of Veterinary and Animal Sciences, Bikaner, said: "We have never seen such symptoms in Lumpy. For the first time, fever with sores and mouth ulcers are being observed. There is a possibility of mutation in the virus. Many laboratories are doing a research on this."

Chief Minister Ashok Gehlot is worried about the prevailing situation as animal husbandry constitutes the backbone of Rajasthan's economy. Milk is the primary source of income for farmers in this desert state.

For the second time in just over a fortnight, Mr Gehlot has written to the Centre, asking the government to declare LSD a national calamity as it has spread to 13 states.

In his letter to Prime Minister Narendra Modi, Mr Gehlot has stressed the need for additional aid to counter Lumpy and has also asked for Rajasthan to be given a priority once a vaccine against Lumpy is ready.

While there is still no vaccine to counter the disease, goat pox vaccine has proved to be effective. Rajasthan has 16.22 lakh goat pox vaccine doses with which 12.32 lakh cattle have been vaccinated so far. However, with more than 11 lakh animals affected by the virus and with 51,000 cattle deaths in the state, livestock is in danger as cases of Lumpy are on the rise.

Farmer Bhodu Ram Raigar in the outskirts of Jaipur city said he had no knowledge about Lumpy and his cattle were not vaccinated. Now, it's too late.