Rahul Gandhi, for the first time in his political career, would contest the Lok Sabha election from two seats-- Amethi and Wayanad. 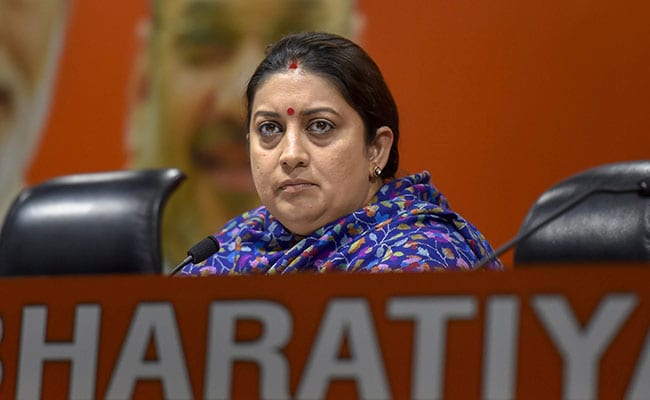 Union Minister Smriti Irani on Friday continued with her spate of attacks on Congress president Rahul Gandhi, who is contesting the national election on a second seat in Kerala. She was addressing a rally in Amethi-- Mr Gandhi's parliamentary constituency-- when she asked the voters of the city to get rid of the "missing MP".

"It is the election of Amethi's independence. Free yourself. Amethi, from the shackles of a missing MP," she added.

Ms Irani and her party alleged that the Congress chief didn't go to his constituency after winning the elections.

"When Yogi Adityanath formed the government in Uttar Pradesh, suddenly the Amethi MP (Rahul Gandhi) remembered Ram temple. I got to know that Rahul ji filed nomination from another constituency, somebody (jokingly) told me he has left Amethi," she added.

Mr Gandhi, for the first time in his political career, would contest the Lok Sabha election from two seats-- Amethi and Wayanad. He filed his nomination from the southern state on Thursday.

On cue, Ms Irani headed to Amethi and delivered a sharp attack.

"This is a big sign that a person who has enjoyed power piggybacking on Amethi for 15 years has left Amethi and is filing his nomination today from some other place. Amethi will never forget the insult and betrayal," said the BJP leader.

"I want to warn Wayanad. If you want to see Rahul Gandhi's capabilities as an MP, come and see the state of Amethi. The person who has been betraying Amethi for the last 15 years has come to your place to cheat you," she added.

Smriti Irani had lost to Mr Gandhi from Amethi in 2014.