PM Modi Lookalike, Once A BJP Campaigner, To Take Him On From Varanasi

Lok Sabha Election 2019: Abhinandan Pathak, PM Modi's lookalike who used to campaign for the BJP, has said that he will file his nomination from Varanasi 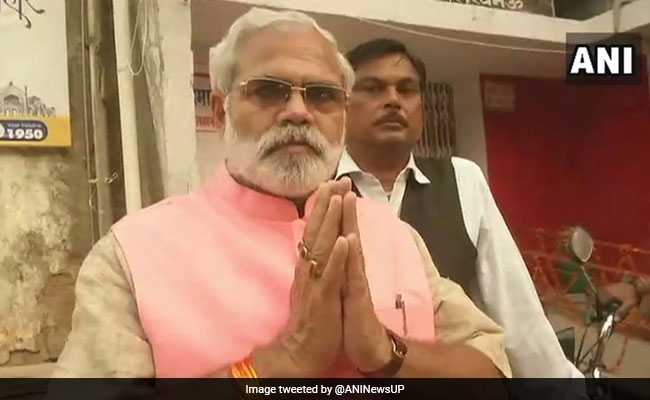 Prime Minister Narendra Modi may have to run against a candidate who is almost his mirror image, at least in the way he dresses, in the ongoing general election. Abhinandan Pathak, PM Modi's lookalike who used to campaign for the BJP, has said that he will file his nomination from Varanasi as an Independent candidate, adding that he will support Congress president Rahul Gandhi if he wins.

"I'll also file nomination from Varanasi on 26 (April). I am not a dummy candidate. I am not against anyone but 'jumla'. After winning, I'll support Rahul ji's PM candidature," said Mr Pathak, who filed his nomination as an Independent candidate from Lucknow on Friday.

PM Modi, who is the sitting MP from Varanasi, is also set to file his nomination for the constituency on April 26.

Abhinandan Pathak is known for dressing and speaking like the Prime Minister. He even begins his speeches with 'Mitron'. But after he ditched the BJP-led NDA constituent Republican Party of India (Athawale) last year, the similarities started ending there. Abhinandan Pathak is known for mimicking the Prime Minister's style, targeting him over his promises of "achche din" and depositing Rs 15 lakh in the bank accounts of every Indian.

"Since I look like Modiji, people will always ask me where are the 'acche din' (good days), as promised by Modiji ahead of the 2014 Lok Sabha election. Hurt by seeing problems of the common man, I left the BJP's ally to join Congress last month," he had said last year.

Mr Pathak had earlier participated in door-to-door canvassing for the BJP during the Gorakhpur bypoll which the party eventually lost.

Varanasi will go to polls on May 19 in the last of the seven-phase staggered national polls and the counting of votes is scheduled for May 23.