"Back Home:" Man Posted Selfie Hours Before He Died In Plane Crash In Kerala

Before take off, Sharufudheen Pillassery posted the photo on his Facebook page with the caption "Back Home." However, he was among the 18 people killed after his flight crashed in Kerala's Kozhikode. 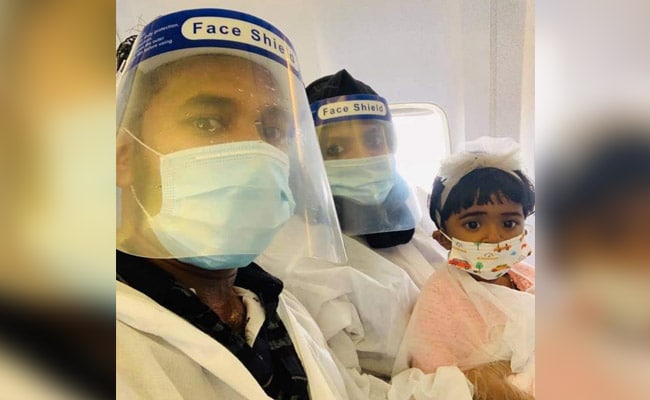 Sharufudheen Pillassery, along with his wife and three-year-old daughter in PPE kits, inside the plane.

A selfie photograph taken by Sharufudheen Pillassery, along with his wife and three-year-old daughter in PPE kits, inside the Air India Express flight from Dubai, was viral online after reports emerged that he had died in the plane crash in Kerala on Friday.

Before take off, Sharufudheen Pillassery posted the photo on his Facebook page with the caption "Back Home."

The picture shows the 35-year-old man and his family wearing masks and face shields onboard the flight, which later overshot the runway while landing at the Kozhikode airport and fell 35 feet into a valley below before breaking into two pieces and killing 18 people, including the pilots.

While Mr Pillassery died of his injuries, his wife is seriously injured and undergoing treatment at a Kozhikode hospital.

Their daughter, who had minor injuries, has been handed over to her grandparents.

Amid heavy rain, the Air India Express flight IX-1344, carrying 184 people including passengers and crew from Dubai, broke into pieces after skidding off the runway at Kozhikode airport at 7:41 PM.

This morning its black box was found. 127 people - injured in the accident - have been admitted to 13 hospitals in and around Kozhikode.

A 29-year-old woman, Sahira Banu, whose dream was to get a government job, had gone to Dubai around 10 months ago and was taking back the Air India Express flight to pursue her dream, a relative said. Her three children were also travelling with her.

While two of her children, who survived, are undergoing treatment, her youngest 10-month-old son died along with her in the plane crash.