India, Uganda Pledge To Fight Terrorism In All Forms 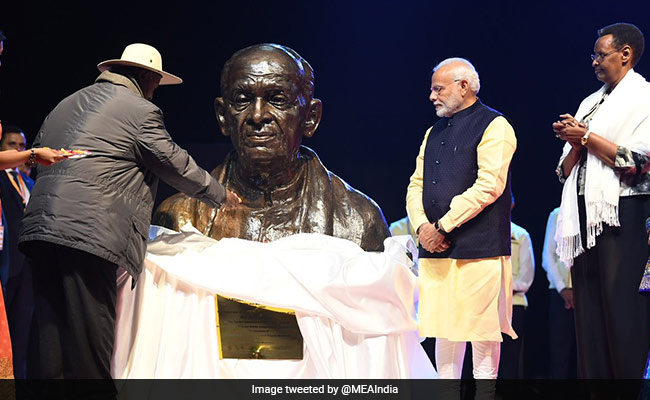 India and Uganda today voiced their strong commitment to combat terrorism in all its forms and manifestations, and reaffirmed the need for the UN Security Council's comprehensive reform to make it more effective to the geo-political realities of the 21st century.

According to a joint statement issued after talks between Prime Minister Narendra Modi and Ugandan President Yoweri Museveni, the two leaders underlined the traditionally warm and close ties between the two countries.

They agreed that the terrorism poses a grave threat to global peace and stability and reiterated their strong commitment to combat it in all its forms and manifestations, it said.

They stressed that there could be no justification for acts of terror on any grounds whatsoever.

The leaders asserted that strong measures should be taken against terrorists, terror organisations, their networks and all those who encourage, support and finance terrorism, or provide sanctuary to terrorists and terror groups, it said.

They also underscored the need to ensure that terror organisations do not get access to any weapons of mass destruction or technologies and committed to cooperate for the early adoption of the Comprehensive Convention on International Terrorism (CCIT), the statement said.

India had proposed the CCIT more than two decades ago in the United Nations as an instrument for a global alliance of nations against terrorism.

PM Modi and President Museveni reaffirmed the need for a comprehensive reform of the UN Security Council, including its expansion, to make it more representative, accountable, effective and responsive to the geo-political realities of the 21st century, the statement said.

India along with Brazil, Germany and Japan has been pushing for the expansion of the UN Security Council for long, saying that the current UN and its powerful Security Council do not reflect the ground realities of the 21st century.

They reiterated their commitment to intensify their cooperation in the UN and other multilateral organisations in order to address current global challenges such as climate change and to foster international and regional peace and security, as well as sustainable development.

The two leaders emphasised the need for regular convening of bilateral mechanisms, including at Foreign/External Affairs Ministers level, to review the overall state of bilateral relations, and for the expeditious implementation of the economic and development cooperation projects.

PM Modi arrived in Uganda on Tuesday on a two-day state visit, the first by an Indian prime minister in 21 years.

President Museveni praised the contribution of the 30,000-strong Indian Diaspora towards Uganda's national development and economic growth. India appreciated the significant role played by Uganda for economic integration and maintenance of peace and stability in the region.

During the visit, PM Modi also announced gifting of 100,000 National Council of Educational Research and Training books for school-going children of Uganda and 100 solar power irrigation pumps for helping Uganda's efforts in the development of agriculture.