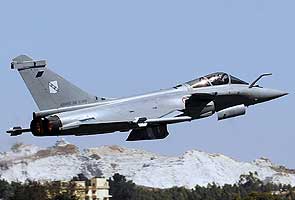 New Delhi: India is all set to dash through the last lap in its quest to buy 126 medium multi-role combat aircraft, estimated to be worth $10.4 billion, when the Defence Ministry on Friday opens the commercial bids of Eurofighter Typhoon and Rafale to take a final call on the lowest bidder.

The four-year-long winding tendering process that began in August 2007, will reach its most crucial moment when the Indian bureaucrats and the Indian Air Force (IAF) officers open the tender papers in the presence of representatives from the manufacturers - European consortium from Germany, Britain, Italy and Spain EADS Cassidian and the French Dassault, Defence Ministry officials said on Thursday.

This is but one last step before the lowest bidder is identified, as the Indian officials will peruse the commercial offers to see what the fly-away cost of the aircraft will be and then work for the next fortnight to arrive at the life cycle cost and the technology transfer cost on set parametres.

The offset offers of the two companies too will come under scrutiny, a clause included in the tender as per Indian Defence Procurement Procedures (DPP) of 2006. This requires the winner of the tender to invest 50 percent of the deal amount back in Indian defence industry in an effort to energise it.

The offset clause, an accepted norm in global military purchases, under the Indian DPP mandates that any foreign firm that wins a defence deal worth over Rs.300 crore will have to plough at least 30 percent of the contract amount back into Indian defence industry.

All the four aspects of the commercial offer - fly-away cost, life cycle cost, technology transfer cost and offsets - will be taken into account when the final winner of the contract is identified, according to officials.

The Indian contract is critical for both the firms, as it would help in keeping the production lines of their respective aircraft alive for at least the next half-a-decade.

India had, in April this year, down-selected Eurofighter Typhoon and Rafale and asked them to extend their expiring commercial bids till middle of December this year.

By that act, India effectively rejected the other aircraft that were on offer - American firms Lockheed Martin's F-16 and Boeing's F/A-18, Russian United Aircraft Corporation's MiG-35 and Swedish SAAB's Gripen.

The shortlist had taken place after a rigorous flight and weapons trials of the six aircraft held at different terrains - Bangalore in South India, Leh in Jammu Kashmir's high altitude Ladakh region and in Rajasthan's desert under searing heat conditions.

After losing out in the MMRCA race, the Americans openly expressed their displeasure and are now pitching their new F-35 Joint Strike Fighter 'Lightning-II', reportedly a fifth generation combat plane, from the Lockheed Martin stable under their foreign military government-to-government sale if India cancels the MMRCA tender.

Promoted
Listen to the latest songs, only on JioSaavn.com
This, when India has already signed a deal with Russia for the joint development of a fifth generation fighter aircraft or FGFA on the Sukhoi T-50 plane design.