Kind Of Cleaning Up Government Did Post 2014 "Unbelievable": Nirmala Sitharaman

Ms Sitharaman recalled that PM Modi often said he did not believe in incremental changes but that the country needed good transformational changes. 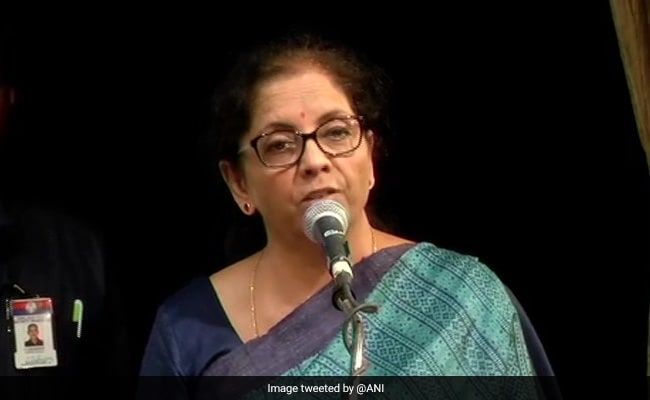 Finance Minister Nirmala Sitharaman on Sunday said the kind of cleaning in the system that the BJP-led government had to carry out after coming to power in 2014 was "unbelievable" and it undertook the exercise without any grudge or worry.

Between 2014-16, there were a lot of questions as to why reforms did not come fast and there were comments that the government was incapable of bringing them, she said while delivering the Nani Palkhivala Memorial Lecture on "Road Map to $5 Trillion Economy" in Chennai.

Pointing out that there were allegations and criticism that the government wants to do something but it did not, Ms Sitharaman said, "I am fully willing to buy that."

She recalled that Prime Minister Narendra Modi often said he did not believe in incremental changes but that country needed good transformational changes.

The stage in which India is today, it cannot have little marginal increments, but good transformational change.

"But still one might say in the last five years the government never did. That can be a critical analysis and I am fully willing to buy that. Because post 2014, the kind of cleaning up the government had to do was unbelievable and we undertook that exercise without a grudge without a worry. We had to do it and it is part of the game," she said.

Elaborating, Ms Sitharaman said states have their own views on Land Acquisition Bill and the government could not have done anything because land after all is with them.

"Abhaav and dabaav both of which are not desirable. Abhaav is inadequacy or lack of adequate presence or shortfall. You do not need a shortfall. You need a government where it should be present, where it is expected to function.", she said.

"So there should not be Abhaav. Dabaav (meaning pressure) is not you want from the government. So, you want Prabhaav. It is broadly an influence, facilitation, broadly the philosophy with which it is mandated to, she said.

Noting that the government has got the mandate through the election, she said, "The mandate was spelt out in so many different ways in its manifesto. So the route towards $5 trillion is this."

On the Insolvency and Bankruptcy Code (IBC) implemented by the government, the union minister said the approach of the IBC was not to shut business.

"IBC does not end up treating a company closed or bankrupt. It takes on the approach in having some kind of resolution where all people who exploited the company do not come back through the 'back door'," she said.

IBC was done through better management so that the institution remains alive and kicking. It is something which she wanted to carry forward from Modi 1.0 to 2.0.

"The point I am trying to make on this road to $5 trillion economy is that it is not just an abstraction, this is not how I want India to be. But in micro level too, we are coming in response to every stakeholder," she said.