Delhi Doctors Step Out To Back Protesting Colleagues In Madhya Pradesh

The Madhya Pradesh government today gave the protesting junior doctors 24 hours to report back to duty or face action. 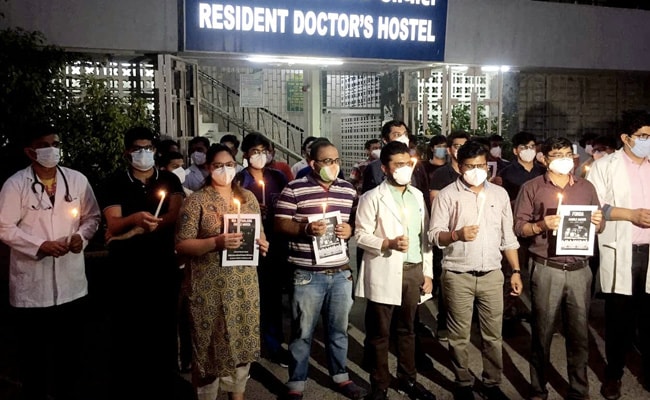 Doctors in Delhi held placards and lit candles in support of their colleagues in Madhya Pradesh.

The standoff between the junior doctors of Madhya Pradesh and the state government resonated today in the national capital. Medics of at least two top hospitals stepped out to back them even as top officials of the Federation of All India Medical Association (FAIMA) got into a huddle in solidarity.

Junior doctors in Madhya Pradesh have been protesting since June 1 seeking higher stipend and free COVID-19 treatment for them and their families. The state government today gave them 24 hours to return to work or face action.

At around 7pm today, several doctors of the All-India Institute of Medical Sciences (AIIMS) and Safdarjung Hospital came out in support of their junior colleagues.

Top FAIMA officials, along with leaders from at least seven city hospitals, met at the Lady Hardinge Medical College to discuss future course of action on this front.

"We are in close contact with the junior doctors in Madhya Pradesh. We shall be updating on more developments as they happen," said one of the officials who attended the meeting said.

The junior doctors had demanded reserved hospital beds in case they get infected while serving pandemic patients, besides a major hike in stipend.

What inflamed their anger and led to the mass resignations was the move by the Madhya Pradesh Medical University in Jabalpur to cancel the registrations of 450 protesting junior doctors soon after the court order was received.

The state government has said it is working to raise the stipend of doctors and to fulfil most other demands. Medical Education Minister Vishwas Sarang today met a delegation of doctors at his residence and asked them to return to work.

"I told them to get back to work within 24 hours or the MP government will be free to take action against them. I asked them to resume work for the sake of patients who are facing such distressing times," Mr Sarang told PTI.

He said the government had provided a stipend of 17 per cent but the doctors were adamant on 24 per cent, the agency reported.

This standoff comes at a critical juncture when India has only begun to overcome the deadly second Covid wave.