It is the first flight reaching Lucknow with Indians stuck abroad due to the coronavirus-triggered lockdown. 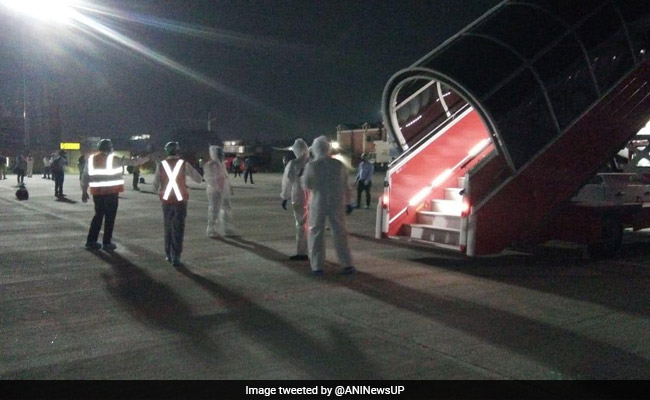 The passengers were screened at the airport and then sent to quarantine.

An Air India flight with 182 Indians from Sharjah in the United Arab Emirates arrived in Lucknow on Saturday evening, officials said.

This is the first flight reaching Lucknow with Indians stuck abroad due to the coronavirus-triggered lockdown.

"An Air India flight IX184 arrived in Lucknow from Sharjah on Saturday at around 9.00 pm. The tentative number of passengers arriving in Lucknow is over 180. This is the first flight arriving in Lucknow during lockdown bringing back Indians stranded abroad due to the coronavirus-induced lockdown," Chaudhary Charan Singh International Airport Director AK Sharma told PTI.

The passengers were screened at the airport and then sent to quarantine.

Lucknow DM Abhishek Prakash told news agency PTI, "The passengers who have arrived today have been placed under paid quarantine in Lucknow. We have identified ESI Hospital (a government hospital in Sarojininagar area of Lucknow), and any passenger found symptomatic will be admitted to that hospital. Rest of those will book paid quarantine facility after arrival, and spend next 14 days there."

Senior officials of the police and district administration were present at the airport when the flight landed.

Sub-Divisional Magistrate of Sarojininagar Praful Tripathi, who was present at the airport, said 182 passengers arrived on Saturday evening.

The Indian government had on Monday announced plans to begin a phased repatriation of its citizens stranded abroad from May 7.

The government also said that Air India will operate 64 flights from May 7 to May 13 to bring back around 15,000 Indian nationals stranded abroad due to the lockdown.

India imposed a nationwide lockdown to curb the spread of coronavirus in the country, grounding all international flights since mid-March.

Under the repatriation plan, the government will be facilitating the return of Indian nationals stranded abroad on compelling grounds in a phased manner.

The evacuation flights are expected to land at 14 airports across India including Delhi (10 flights), Hyderabad and Kochi nine each, Kozhikode (four), Trivandrum (one), Kannur (one), Chennai (nine), Trichy (one), Ahmadabad (five), Mumbai (four), Srinagar (three), Bengaluru (four), Lucknow (one) and Amritsar (one).