Chinmayanand Arrested: Chinmayanand, 73, was hospitalized yesterday after he complained of "uneasiness". 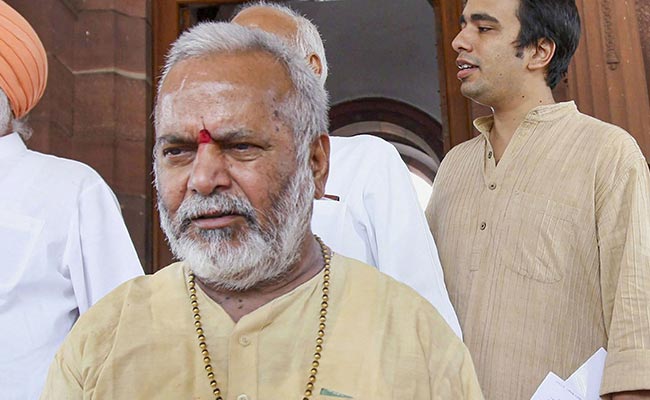 Chinmayanand has been accused of rape by a law student of Uttar Pradesh. (File)

Bharatiya Janata Party (BJP) leader and former union minister Chinmayanand, accused of rape by a law student, has been arrested. He has been taken to a hospital by the police for medical tests, five days after the woman detailed what she said was a year of sexual assault and blackmail before a court. The police did not confirm whether Chinmayanand, a former union minister, had been arrested or would be.

Chinmayanand, 73, was hospitalized yesterday after he complained of "uneasiness". The politician, who runs several ashrams and educational institutions, wasn't charged with rape even a month after the woman filed a police complaint.

Here are the highlights after Chinmayanand's arrest:

Sep 20, 2019 18:34 (IST)
Chinmayanand's lawyer Pooja Singh speaks to NDTV:
Chinmayanand is cooperating with probe. Conspirators won't succeed; they would be legally punished. The girl went missing. Then her father claimed she has been kidnapped. She was found in Rajasthan. Questioned in Supreme Court, she said that she went with her friends, and that it was her wish. Had the girl been abused, then wouldn't she have disclosed it to Top Court, in closed-door proceedings?
Sep 20, 2019 15:30 (IST)
Chinmayanand admits to allegations against him: SIT
SIT chief Naveen Arora quoted as saying by news agency ANI: Chinmayanand has admitted to almost every allegation levelled against him, including that of sexual conversations and body massage. Circumstantial evidences are also being examined. Chinmayanand said he does not want to say more as he is ashamed of his actions.
Sep 20, 2019 14:44 (IST)
Cops Water Down Rape Charge
The politician has been charged not with rape but the milder "misusing authority for sexual intercourse" or "sexual intercourse not amounting to the offence of rape", according to his lawyer. The police have not confirmed this charge, which carries a punishment of up to five years in jail and a fine. He has also been charged with stalking, criminal intimidation and wrongful confinement.
Sep 20, 2019 14:32 (IST)
SIT was investigating in detail: Official
OP Singh, DGP of Uttar Pradesh, says: "We have arrested him from the ashram this morning. We have produced him in court and sent him to jail. We have also arrested three other accused in the case of extortion filed by Chinmayanand's side... There was no delay. The SIT was investigating in detail. We conducted lots of of forensic investigation and then made the arrests."
Sep 20, 2019 14:27 (IST)
Chinmayanand lodged at Shahjahanpur jail
SIT says we have taken all precautions as Chinmayanand is not keeping well... He was taken for medical examination. "After presenting all documents in the court, he was sent to 14 days judicial custody. He has been lodged at Shahjahanpur jail."
Sep 20, 2019 14:25 (IST)
Chinmayanand has accepted all allegations: SIT
Special Investigation Team head Naveen Arora says: "Chinmayanand has accepted all allegations.. He was arrested based on such allegations. He has said he doesn't want to speak anything, as he is embarrassed."
Mr Arora says the SIT was investigating the past few days.. "the video footage helped us arrest him today and take him to court. Some mobile data was deleted but it will be found in a few days," he says.
Sep 20, 2019 11:24 (IST)
14 days jail for Chinmayanand
Chinmayanand has been sent to jail for 14 days by court.
Sep 20, 2019 10:40 (IST)
No arrest-related documents given to us: Chinmayanand's lawyer
Chinmayanand's lawyer Pooja Singh says the special investigation team took signatures of Chinmayanand's relatives on the arrest memo but no arrest-related documents, including a copy of the FIR, were given to them.
Sep 20, 2019 10:31 (IST)
Chinmayanand taken to court
After hospital visit, BJP Leader Chinmayanand is being taken to a court.
Sep 20, 2019 10:15 (IST)
The Chinmayanand rape case
A law student has accused the BJP's Chinmayanand of rape and blackmail. The woman, a second year student at a law college in Shahjahanpur run by Chinmayanand, accused the former Union Minister of sexually assaulting her for a year. The allegations surfaced when the woman went missing on August 24 after putting up a Facebook post, without naming Chinmayanand. Her family accused the senior BJP leader of kidnapping her.
The woman, tracked down by the UP police six days later, reportedly shared her account in a closed hearing at the Supreme Court, which ordered a Special Investigation Team of the UP police to inquire into her charges. Sources say in a 12-page written complaint to the Delhi Police, the woman has described what she alleges was a year of sexual assault, blackmail and threats. The Delhi police then forwarded this complaint to the Uttar Pradesh police.
The woman claims she went into hiding after gathering video proof to substantiate her allegations against Chinmayanand, a politician who was Minister of State for Home in the Atal Bihari Vajpayee-led BJP government.
He is accused of calling her to his room, blackmailing her with a clip of her taking a bath and raping her repeatedly. The woman also alleges she was often taken this room by his aides at gunpoint and forced to give him massages.
Sep 20, 2019 10:09 (IST)
Chinmayanad taken to hospital
Chinmayanad has been taken for a check-up under heavy security. There was no ruckus when he was being arrested, his lawyer has claimed.
Sep 20, 2019 10:08 (IST)
Chinmayanand arrested in UP's Shahjahanpur
The BJP leader was arrested around 8:50am by the special investigation team (SIT) of Uttar Pradesh police from his residence "Divya Dham" in Shahjahanpur amid heavy security deployment, his lawyer Pooja Singh says.
Sep 20, 2019 10:07 (IST)
Chinmayanand arrested in the morning
BJP's Chinmayanand, accused of rape by a law student, has been arrested, his lawyer Pooja Singh says.

Gold Jewellery Worth Over Rs 94 Lakh Seized At Delhi Airport